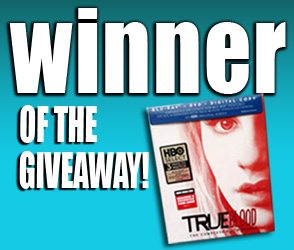 The True Blood Season 5 Blu-Ray/DVD Combo Giveaway contest has ended and WE HAVE A WINNER!

First off, we’d like to thank the person who created the video below.  We based our contest on this video which was made by MyFutureLover. We thank her for providing this video documenting the kills in Season 5 and for also taking the time to make it, which must have represented hours and hours of work. We have attempted to contact her, but couldn’t find any contact info, so we’ll thank her here in public:

Thanks for the video MyFutureLover!

The video which gave us the basis for the Giveaway:

It was a tough competition and no one got it absolutely right, and since it was so difficult, we narrowed it down to those who got the most prolific killer correct and came closest to the number of kills. We have to admit that we too, were surprised by the correct answers.

So, the correct answers for the contest are:

Most prolific kiler was:

We were thrilled to have received a total of 51 entries on both sites, TrueBlood-online.com and AllStephenmoyer.com.

From those entries the following is a BREAKDOWN OF THE ANSWERS:

Number of killed: The totals given ranged from a low of 21 to an almost unbelievable high of 239.

Most Prolific Killer: Several other True Blood characters were chosen as the most prolific killer and below is the totals for each.  As you can see, Russell was by far the favorite, but he wasn’t as lethal as Eric was last season.

Total by character of entries received:

So, who guessed Eric and got closest to our number killed of 81?

It was Molly with her answer below:

Congratulations Molly!  Be sure to check your IN Box for an email.

If you didn’t win, you can still order a copy of True Blood Season 5 here: