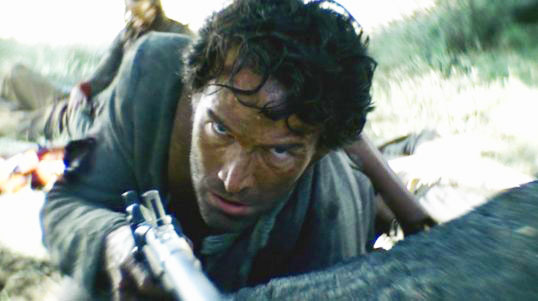 Thanks to Billsbabe “lisafemmeacadienne” for this wonderful article about the 28th Regiment.

The 28th Louisiana Regiment is not mentioned in the history texts, but it had a very important role in the Civil War in Louisiana, thanks to Colonel Henry Gray of Bienville Parish, and Lieutenant General Richard Taylor (son of President Zachary Taylor).

In the True Blood storyline, the character William T. Compton served in this particular regiment, so I put together some information for the fans. The history of these volunteers has been reconstructed through journal entries and the few military documents that survived the chaos of the final days of the war.

The 28th consisted of ten independent companies from different parishes, which were organized and trained in Monroe by Colonel Gray. 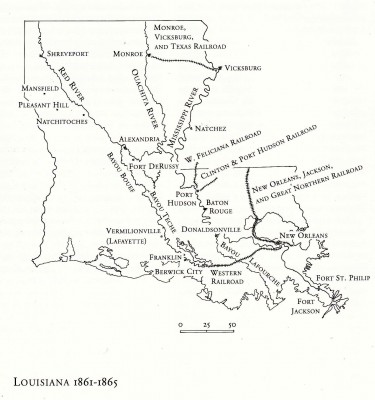 These volunteers joined with a deeply ingrained sense of southern honor, which dictated that they protect their homes and families from the encroaching Union armies. Some of the volunteers were former slaves, eager to defend their freedom. Both of these reasons kept these soldiers from leaving the regiments, even when conditions became unbearable. Early in the war, the 28th Regiment faced terrible sickness; at one point, 2/3 of the men were sick with malaria, yellow fever, and cholera due to living in the swamps along the railroad where they were stationed, yet they refused to abandon their regiment.

After a year of service, the men finally saw action at Camp Bisland (pronounced biz-lend) / Bayou Teche (pronounced bye-yoo-tesh) when the Yankee gunboat, the Diana, ventured too far into the Atchafalaya, (pronounced ah-chaff-ah-lie-yah) which is a network of rivers that branch off of the Mississippi River. A division of the 28th, on reconnaissance, spotted the gunboat and alerted Gray. As the boat pushed further up the channel, a Confederate ambush was lying in wait for them. This began the 28th’s involvement in repelling the Union’s Red River Campaign. 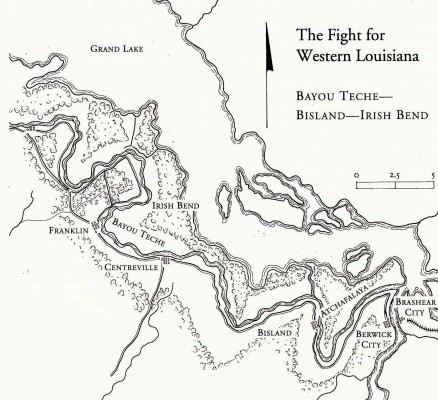 The Union army had three goals at the start of the Red River Campaign in Louisiana: to destroy the Confederate Army commanded by Taylor, thus controlling Shreveport, Louisiana; to control the Red River to the north and occupy east Texas; and to confiscate as much as a hundred thousand bales of cotton from the plantations along the Red River. 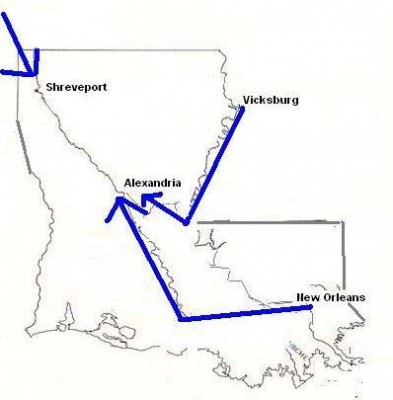 “The Confederates sprang the ambush on the ship and for three hours poured volley after volley of rifle and cannon fire into it. To the men penned up in the Diana it was a nightmarish hell. The decks were slippery with blood, and the groans of the wounded drifted through the darkened, smoke-filled ship. The roar of the Rebel guns, the splat of minie balls against the sides of the ship, and the crash of artillery shells splintering the decks helped create an unforgettable scene.

The Diana’s commander, after seeing one crewman after another fall to the deck from the Rebels accurate fire, finally raised the white flag. The Confederates then removed the 150 sailors, 30 of whom were dead or seriously wounded, and took over the vessel. The Winn Parish men of Company K moved the ship up the Teche to help cover Camp Bisland.”

To break the stronghold at Camp Bisland, the Union forces tried to send 12,000 Union troops by boat to land north of the area, and another 4,000 to land to the south, trapping the Confederate forces in the middle. When the 28th discovered this plan, the Rebel soldiers were split into two groups; one to prevent the northern landing, one to prevent the southern. On a third front, the Winn Parish soldiers of Company K stayed on the Diana to fight the Union directly on Bayou Teche.

The Union army boats beat the Confederates to the landing sites, and bombarded the Rebel forces and the Diana for two days. The Diana was severely damaged, and had to retreat for repairs. However, each time the Union forces tried to land on the banks of the Bayou, they were successfully repelled by the 28th on the southern end. On the northern end, Union forces made landfall and began their march south. The 28th had no choice but to engage the forces at Irish Bend, where they surprised the Union army with their ferocity and determination. With only a 1,000 men, they charged.

“The screaming Rebels came bursting out of a strip of woods they had been hiding in and ran across a muddy cane field towards the startled Yankees. The forward enemy regiments, taking cover in shallow ditches, tried to make a stand, but were soon outflanked and caught in a terrible crossfire. The Federals later recalled that the Louisiana men used “buck and ball,” a type of musket round that included one rifle ball and three buckshot. This was a deadly load at close range, proven by the fact that the 159th New York Regiment, that faced the 28th, lost 115 men our of a total of 375 in the fight!”

Several battles ensued over many days, and eventually the 28th retreated northward as the Union army pursued them. Colonel Arthur W. Hyatt, a member of the 28th’s Brigade, described the forced march in his journal:

“A regular race from the enemy. Feet sore, dust intolerable . . . . When we halt ‘ we squat ourselves down, no matter where–in the sand, in the mud, anywhere–and our only hope is that the halt will last fifteen minutes. At night you fall down too tired to be careful of selections, and go to sleep . . . without taking off clothes, shoes or cap…”

The 28th made it to the Rebel stronghold in Alexandria, and the Union forces ceased pursuit. After a few months, they were able to return to Bayou Teche/ Camp Bisland. They were called upon as reinforcements for various skirmishes in southeast and south central Louisiana. They also helped to successfully capture 400 Union soldiers at Bayou Fordoche near Morganza. 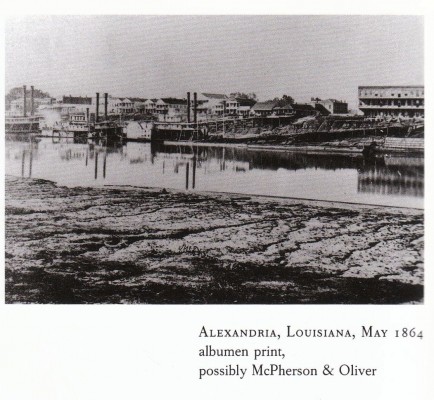 Finally, the men were called back to the Monroe area to help protect a shipment of arms. On the way there, they crossed the Red River at Pineville (near Alexandria) in December, and were immediately hit by foul weather, as described by Felix Poche (pronounced po-shay), a member of Gray’s staff:

“The thunder roared, lightening struck all around us and immense pines … fell by the hundreds… I learned several persons had been hurt.
Soon the ground was covered with water . . . The wagons . . . were unable to pass. . .Thus those poor soldiers were drenched to the skin, shivering with cold, starving and dog tired after a march of fifteen miles, having nothing with which to cover themselves, and spent a miserable night near to the fire, as best they could. 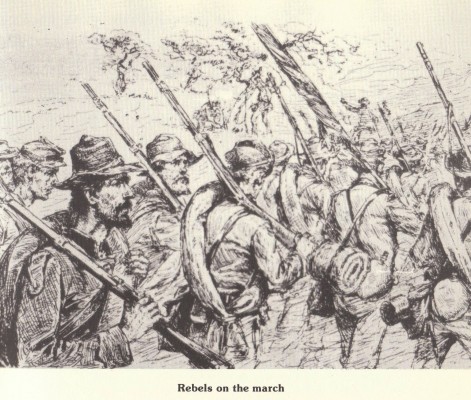 Conditions did not improve at dawn. The supply wagons could not pass over the flooded roads, so the 28th had to endure growling stomachs until the train pulled into camp 24 hours later.

As the army marched through Winn Parish, occasional shrieks of joy could be heard as a bystanding woman recognized a son or husband in the muddy, shuffling crowd of soldiers that were strung out five miles on’ the Winnfield to Vernon road. In some instances, tearful pleading would get one of the 28th’s soldiers an overnight pass to spend some time with the family he had not seen for nearly two years. These scenes were repeated as the regiment continued the march to Monroe.

Christmas Day was spent marching on to the Ouachita River (pronounced wah-chi-tah), which was crossed on the 27th under a cold, winter sky. It is not difficult to understand why more men died from sickness during the Civil War than from battle, when they had to live under such harsh conditions as the 28th did in the winter of 1863-64. Poche entered in his journal on Dec. 31 the following: “The weather was extreme, in the morning it rained and later it snowed,’ and the ground froze. One can well understand the misery and suffering of our poor soldiers without tents, and practically no fire…”

Hyatt’s New Year’s Day entry adds to the description. “The ponds frozen and the boys sliding on ice . . . The ground too cold to lie down. Pitiable at night to see them nodding around campfires with only one blanket. This is soldiering, this is.”

The regiment did not get to the arms shipment in time; all the marching had been in vain. They retreated to the Rebel stronghold in Pineville.

When the Yankees started their three-pronged Red River Campaign, Fort de Russey, just below Alexandria, fell to the Union army. The 28th began retreating north, and made their last stand in a field southeast of Mansfield called Pleasant Hill, along with the 18th and the Consolidated Crescents Regiments. There were 9,000 Confederates to stop 30,000 Union soldiers. 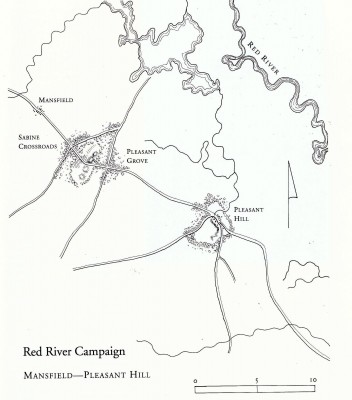 It was a slaughter. They were literally fighting an uphill battle on a steep slope, exposed every time they made a forward advance. The Union army would cut them down every time they stood up to shoot or run. One Major, W.F. Blackman, tried to lead the charge by grabbing the Confederate flag and riding up the hill. His soldiers bravely followed, many taken down by the accurate fire of the Union soldiers. They were able to scatter the Union soldiers with their advance and take the hill, but at the terrible price of 800 Confederate soldiers losing their lives.

This began a series of battles and retreats, with the Union on the defensive. They would try to rest, and the 28th would attack, again and again. The final battle for the 28th was at Yellow Bayou, when both sides ran out of ammo, and began hand-to-hand combat. This time, Union numbers prevailed, and the 28th had to retreat as far north as Arkansas.

Military organization started to fall apart, and soldiers began slipping away in the night to return home as they realized the war was lost. When surrender terms were accepted on May 26, 1865, many went to Shreveport or Monroe to be pardoned for their role in the war and pick up what was left of their lives and homes.