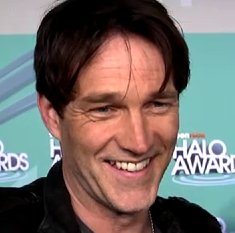 Stephen Moyer spoke to MTV news at the HALO Awards last week and it turns out he is enthused about the idea of a bromance between Eric and Bill in Season 5.

As seen in the video below, they think that the men in the “True Blood” cast are especially bromantic, and it’s awesome. The scene in the season three finale, when Eric says to Alcide and Bill: “If you two are done eye-f—ing each other, can we go?” is a good example of it. And, how could we forget the BAM scene when Sam dreamed of an encounter with Bill in an early episode of the same season. In addition, Alexander Skarsgård recently hinted at more Bill-Eric moments, too.

Before they approached Stephen with the bromance angle, however, they asked if he’d had a chance to read the season five scripts yet, which were delivered to the cast members recently.

“How did you hear that?” a suspicious Stephen asked.  “Yes we did [get them]. I haven’t read it yet. I haven’t had a moment to. It’s been busy the last few weeks and days, so I haven’t had a chance,” he admitted. “I was talking about it today, I really must. Anna [Paquin] hasn’t read it either.”

Now onto the pressing question: Will we see more of the bromance between Bill and Eric develop next season?

“My missus got to have a go with him last year, so I think it’s my turn,” Stephen said with a smile. “I know [Alex] is very excited about that.”

Ah, so if Bill and Eric “have a go,” what does he think about Joe Manganiello’s hope for a Sookie-Alcide hook-up?

“Everybody jump on!” he joked.

Sorry, this video seems to only be available in the US.