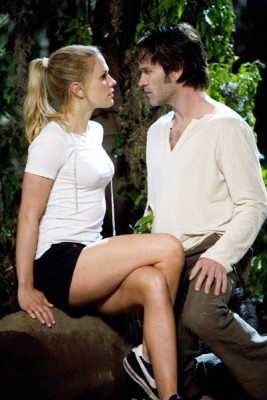 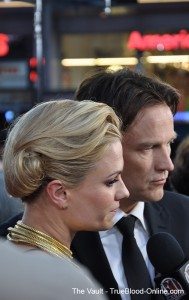 Stephen Moyer and Anna Paquin were interviewed by MTV, in the video below, at the True Blood Season 7 premiere, and were asked how their characters would be going out.

Bill ended last season losing all the superpowers he got when he drank Warlow’s blood. So that means no more visions, and no more super-duper strength, which has to be hard for anyone to reconcile, much less a centuries-old vampire. How’s he dealing with all that?

“He is rethinking everything that has happened to him over these years, since he came to Bon Temps,” Moyer said. “I think he feels like he’s got some wrongs to right, and some mistakes that he made need to be corrected.”

Is one of those mistakes losing Sookie?

Will theBill and Sookie live happily ever after, or will Bill meet the True Death by season’s end?

Tell us what you think by commenting below.