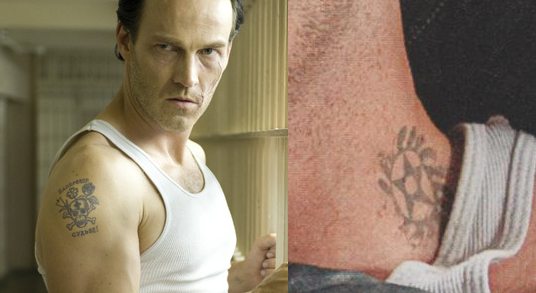 “In Russian prisons, your life story is written on your body, in tattoos. If you don’t have tattoos, you don’t exist.” – Eastern Promises

Sometimes we tend to forget that tattoos are not merely a fashion trend but do represent deep symbolic meaning, especially in the criminal world.

There is no Russian criminal without a little ink to show his fellow inmates who he is, what he’s done and what he stands for. In The Double Stephen Moyer’s character, Brutus has a clearly visible tattoo that caught my attention.

Our AllStephenMoyer Board member, and owner of the only Russian Stephen Moyer fan site, Kseniya from Ukraine discovered that the exact same tattoo on Stephen has been used before in the movie Eastern Promises to star Viggo Mortensen. 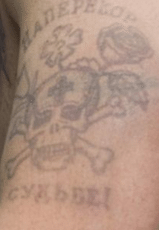 The information available about Russian criminal tattoos is all related to the Russian mafia and may not apply to spy Brutus serving his sentence in an American prison, but it’s interesting nevertheless.

Viggo sports the tattoo in question on his left upper arm where for Stephen’s Brutus the right upper man was chosen.

The tattoo represents a skull with three flowers with the words “наперекор судьбе” which means ”In spite of destiny”. This kind of tattoo would be found on the body of a high-ranking gang member who is a murderer and celebrated three teenage birthdays in prison.

I am not sure if this is really the case with Brutus since it seems that the tattoo was more chosen for its aesthetics and feel than for its symbolism.

Through the co-writer of The Double Derek Haas we learned exclusively that director Michael Brandt gave Stephen the choice of tattoo. Brandt: “We gave Stephen some ideas to choose from, and the one he picked happened to be the one Viggo had. No deeper meaning other than the tattoo spoke to Stephen in some way. It just resonated with him.”

Brutus’ second tattoo is a star on his neck. Stars symbolize the dignity of the person wearing them and that they live by the code and tradition.

A couple of remarks Stephen made in public make me think that he is considering to get tattooed himself. I wonder what image and symbolism he would choose if he ever did decide to follow the example of his wife and decorate his body with ink.