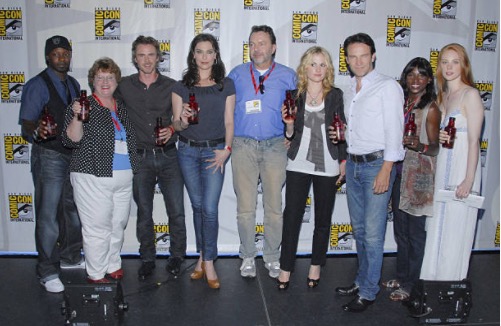 Below are videos from the True Blood Panel Comic-Con 2009 in San Diego which took place on JULY 25, 2009. Cast members participating in the event were True Blood cast members Alexander Skarsgard, Nelsan Ellis, Sam Trammell, Michelle Forbes, Anna Paquin, Stephen Moyer, Rutina Wesley and Deborah Ann Woll. Also on the panel was Charlaine Harris, the writer of the books and Alan Ball, the showrunner and creator of True Blood. The panel took place in Ballroom 020 at the San Diego Convention Center.

During the panel Alan Ball announced the True Blood drink.