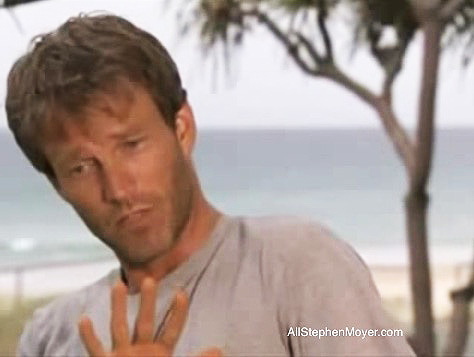 For those of you who only know Stephen Moyer as the dark-haired, pale vampire Bill… this clip is for you….Stephen talks about his character in The Starter Wife with Debra Messing.

The Starter Wife was a 2007 USA Network television miniseries, based on the novel of the same name by Gigi Levangie Grazer. Its title is derived from the concept of a starter marriage. Filmed over four months in Queensland, Australia, the plot focuses on Molly Kagan (Debra Messing) who, after years of marriage to a Hollywood film mogul, is forced to redefine herself and her role in society when her husband leaves her for a younger woman.

The mini-series premiered with a two-hour presentation on May 31, 2007, at 9:00 pm ET. The premiere attracted 5.4 million viewers, with 2.8 million of them being adults aged 25–54 (the network’s target demographic). Ratings steadily decreased as the series progressed. The series is available for purchase on iTunes (to American customers only) and was available for DVD purchase starting September 11, 2007.

See our Movie & TV Page about The Starter Wife here:

Purchase by clicking on the links below:
Stephen MoyerThe Starter Wife