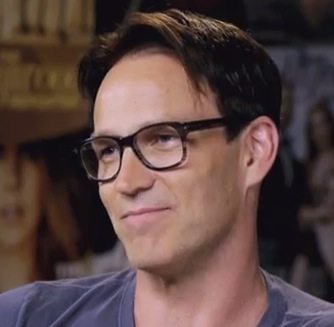 After the “Naked Chef” Jamie Oliver, Britain has now found its “Naked Director” in Stephen Moyer.  In a recent interview with THR Stephen reveals that season 6 picks up exactly where we left of last year, with a naked Bill covered in blood and that is exactly how Stephen directed the premiere episode of True Blood: naked.

“You can imagine for as long as Bill is like that, that is how I had to direct it when I was acting on set. It was quite comic walking around naked, covered in red blood.”

“The modern phenomenon in terms of body hair is to groom, but that is something that maybe wouldn’t have happened thousands of years ago,” he reveals about his character’s look.

“We played that character as having a lot of hair downstairs, so the poor makeup artist had to create these mirkins, as they’re known,” he says. “And so when I had to be on set like that I made them make me a giant fur piece.”

Stephen reveals that the opening scene of season five will be unique to the series in that it’s a long, explosive opening focusing only on the characters who are attempting to escape the Vampire Authority complex.

“What I tried to do was create something that we haven’t necessarily seen before,” he says. “I wanted to make it into an action thriller. I wanted to make the camera another member of the cast.”