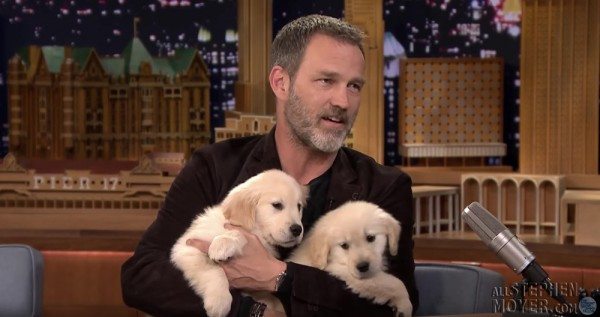 Stephen Moyer appeared on The Tonight Show with Jimmy Fallon last night and while there’s probably nothing cuter than Stephen holding one puppy, holding two just might top it. It’s amazing how both dogs get cuddly when Stephen holds them showing he sure has “the touch.”

At any rate, as lovely as it was to see Steve with the puppies, it was a bit frustrating trying to hear what he had to say about The Bastard Executioner. Still, it was worth watching Steve, however short, just to see him.

What did you think of it?

Below are some adorable photos of the puppies, oh, I mean of Stephen Moyer from the interview:

Click here to see all of the photos in The Tonight Show Photo Gallery.