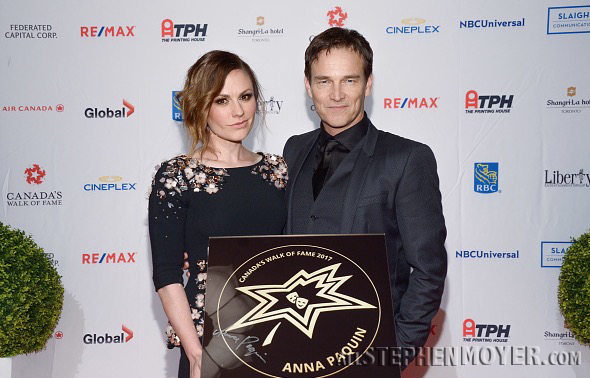 Stephen Moyer sweetly supported his wife Anna Paquin as she was inducted into Canada’s Walk of Fame in Toronto on Wednesday.

At the event, Stephen was quoted as saying,

‘Anna and I have this knack of being totally at home wherever we are in the world,’ Anna’s a Kiwi who then studied at Columbia University and is a New Yorker in her guts. I’m a total London boy. If it hadn’t been for meeting and falling in love with Anna I’d have filmed True Blood and then simply gone back home. We totally changed each other’s lives.’ So proud and lucky to have this beauty on my arm tonight!’ 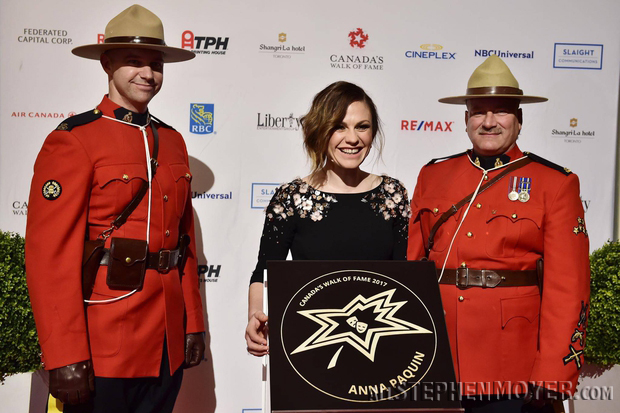 Anna Paquin was quoted at the Gala too, saying the following:

“I’ve worked in Canada an awful lot, because so much shoots here, but it was amazing to get to be part of two completely Canadian productions,” she said. “It was for Canadians, by Canadians, about Canadians.

“To get to experience firsthand the enormous amount of talent and creative power that Canada has to offer … it’s some of the work that I’m most proud of.”

When asked about the barrage of sexual assault allegations coming out of Hollywood with startling frequency since the Harvey Weinstein story surfaced last month, Paquin said she’s been thinking about it lot, but didn’t feel a celebratory event like the Walk of Fame was the right place to start that discussion.

“I have so much to say about that … I just feel like that’s a much larger conversation than a quick catch-up on a carpet,” she said. “But at some point, when I feel more comfortable, I have rather a lot to say about that.”

Below, watch a cute video of Anna with two Mounties in front of her award.

We’ve added additional photos to the album for this event. Click on the button below to see them: