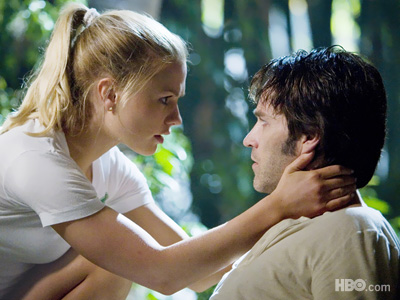 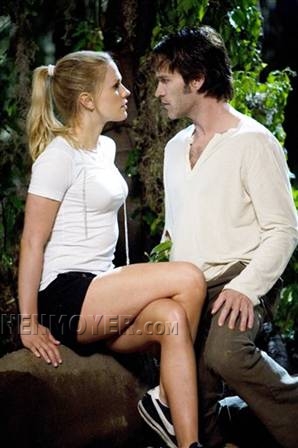 “Bill is really genteel but that doesn’t stop him from being blood-hungry,” Moyer says of his menacing 173-year-old character in “True Blood,” adapted for television by Alan Ball (“Six Feet Under”) from the popular series of Southern vampire novels by Charlaine Harris.

“The tension between Bill and Sookie is quite palpable,” Moyer says in between scenes in which the courtly vampire, who fought for the Confederacy in the Civil War, escorts his lady friend Sookie, a telepathic roadhouse waitress, home on a dark and eerie night.

That sexually suggestive tension is key to “True Blood,” premiering 9 p.m. EDT Sunday. Set in a small Louisiana town (actually the Santa Monica Mountains northwest of Los Angeles), the edgy series chronicles a time when synthetic blood supplies enable Bill and other vampires to live openly among humans, without necessarily feeding on them.

Like Barnabas Collins (Jonathan Frid) in the classic vampire soap opera “Dark Shadows” (1966-1971), Bill has returned to his ancestral home, where he woos Sookie and tries to fit into human society. Like Frid’s Barnabas, Moyer’s Bill is an unresolved paradox — part seductive protagonist, part menacing monster.

“He’s not typically vampiric,” says Moyer, who played a vampire in the Brit miniseries “Ultraviolet.” No long black cape and ghoulish grin for Bill, who dresses yuppie-casual. “But we do get to see him sort of sex-starved at one point,” Moyer says. “And there are moments when he is quite confrontational with other vampires, when other people are predatory with Sookie.”

Ball was looking to produce “lighter” fare after the life-and-death introspection of critically acclaimed “Six Feet Under.”

“Charlaine has just created this amazing world that’s funny and vibrant and scary and also a sort of social treatise, you know what I mean?” Ball says.

“The books are violent and that’s part of the appeal,” he says. “It’s visceral and predatory and unapologetically sexual. And it’s unapologetically romantic in the sense of an old-fashioned romance novel.“

The centuries-old vampire metaphor is “also about the terrors of intimacy, and about any kind of misunderstood, hated, feared minority — homosexuals, other cultures,” Ball says. “When I first pitched ‘True Blood’ to HBO, I called it ‘popcorn TV for smart people.’ “

Like “Moonlight,” “True Blood” plays on the thrill of a vampire-human hookup. But the mechanics of Bill and Sookie’s romance proved tricky for Moyer and Paquin during filming.

“You do get fangs caught in places,” Paquin says, remembering her first lip lock with Bill’s lethal teeth, which pop down when he’s lost in bloodlust. “Perhaps it’s like people with braces trying to make it work. Puncture wounds aside, one gets used to it,” she teases.

Although Ball says his series “is true to the spirit of the novels,” there are differences. “True Blood” takes the powerful and ruthless nature of vampire clans a little further than the novels do, he says. Sookie narrates the Harris books but not “True Blood.” Instead, Ball has given Sookie a female best friend and confidante named Tara (Rutina Wesley).