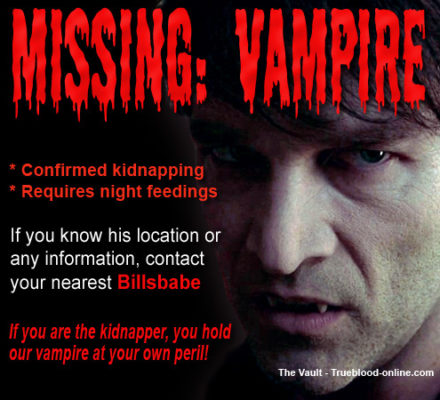 As you know, Bill Compton was kidnapped in the last episode of Season 2. Rest assured that the Billsbabes are not sitting idly by while Bill Compton is missing. We are searching for our Missing Vampire and are asking for your help to get the word out. Here is our poster: 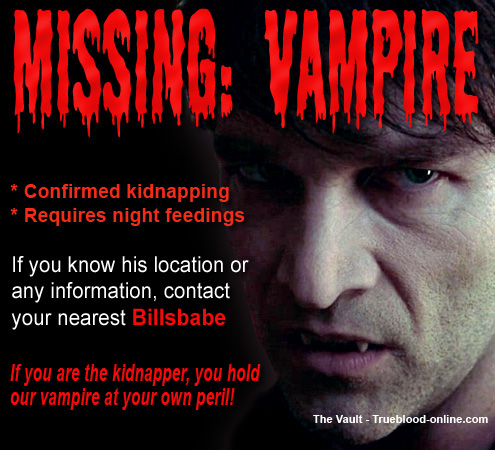 We have identified the known suspects and they are:

Eric Northman, Sheriff of Area 5 – feels threatened by Bill and wants him out of the way so he can pursue Sookie Stackhouse. And, he’d really like to buy up that Compton property.
Lorena – is still in love with Bill, wants to renew her maker/vampire relationship and enjoys abuses like getting hit over the head with a 52″ plasma TV.
Queen Sophie Ann LeClerq – wants him because he knows her secret and resents the fact that he doesn’t like to play Yahtzee
Steve Newlin – the FOTS need a replacement vampire to meet the sun after their failed attempt with Godric, so Bill is their new prisoner.
Maxine Fortenberry – For what other reason than he’s a vampire? Well…also because he sired her son’s girlfriend and she’d like to get her hands on his Wii.

“Operation – Find Missing Vampire Bill” members include: Billshuman, Lynnpd, and WillKill4Bill. Contact us if you have any information regarding the whereabouts of this missing vamp.

Thanks to WillKill4Bill for this cute idea, and to BH for helping me with the suspect list.  I did the poster, LYNNPD.