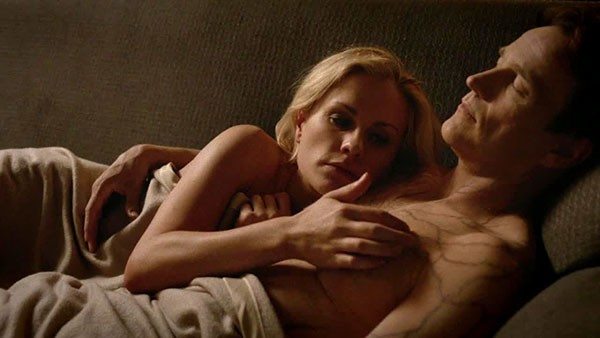 True Blood’s writer, Kate Barnow is the one responsible for last Sunday’s installment of True Blood and we have the Bill parts of the interview with Entertainment Weekly below where she discusses Sookie and Bill’s postcoital pillow talk and Bill’s life-or-death decision. 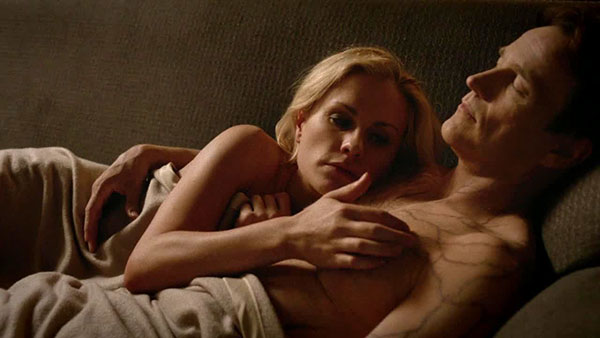 Sookie and Bill’s postcoital pillow talk at the start of the episode is obviously key because it begins setting up his decision at the end to not take the cure.

And it was a big scene because really as a viewer, you’re asking yourself if you’re happy or not about them getting back together. You can’t help but ask yourself, how can Sookie trust him after everything they’ve been through? So she sorta goes back to the beginning and asks the question, was this love based on the real stuff? He answers what she needed to get closure on—whether or not the love was true. We went back and forth on a couple of different versions of it, and I think that we landed at a place where we got some really good emotional information, but we also get some interesting background information—information about Bill’s past, the mission to go seek out Sookie. I think Anna [Paquin] and Stephen [Moyer] played it so beautifully, and it was a really special scene on the day because it felt like the culmination of seven seasons of conflict between the two of them being resolved—but in a very bitter-sweet way because it’s at the end when he’s dying.

In the end, Sookie goes against Eric’s orders again and brings Bill and Jessica through the tunnel to the basement of Fangtasia. Bill decides he doesn’t want to drink from Sarah.

Truthfully, we were a little concerned that maybe with all the flashbacks that people would guess this was where he was heading, that he was heading into this very fatalistic place. I think Bill has always been at conflict with himself as a vampire, and the thing that has kept him going has been Sookie. But I think that he’s feeling fairly resolute at this point that his time is nigh. That’s certainly what episodes 9 and 10 are gonna explore. Who’s to say if his time really is nigh? The moment where he decides he doesn’t want the blood is largely connected to the dream he’s had where Sookie’s holding the baby void. All of those flashbacks, that dream—everything’s adding up to this should be the end. That’s why he decides it, but all hell is about to break loose. People are not gonna be happy with his decision.