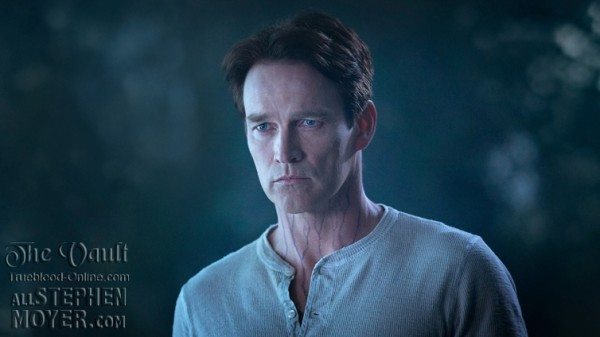 For all the Bill Compton fans, as it was in many of the previous seasons, the fate of Bill Compton is something we are waiting to discover in the True Blood finale which airs tomorrow night. This may be the biggest question of the entire series whether Bill Compton will meet the True Death or live on. Read an interview with Stephen Moyer below where he discusses Bill’s adventures in the final season and his thoughts about it. Of course, he doesn’t give the answer to the looming question, but he does give us food for thought to keep us going until we see tomorrow’s finale.

The vampire’s fate is one of the biggest questions heading into this weekend’s series finale. The previous episode brought him to Sookie’s (Anna Paquin) door to explain his decision not to cure his Hep-V—a choice that surprised Moyer to begin with, he tells The Hollywood Reporter.

“I had a slight issue with it, because I couldn’t understand why he would go to the storeroom to Fangtasia and then say no,” he says. “Ultimately, he goes because he wants to do right by Sookie. His decision to not turn around then and there is his going along with what Sookie has tried to make happen, and it’s really only when he’s right there that he thinks, ‘no.'”

On the series ending as a whole, Stephen talks about how difficult the end of shooting was.

“It’s really hard sometimes — regardless of the fact that obviously I met Anna doing this job and we got married and had babies, if that hadn’t been the case, this would still have been an extraordinary seven years. Playing some of those locations for the last time, it was really hard,” he says. “The guy who’s sitting behind the camera is the guy who’s been sitting behind the camera for seven years. It was all very wrapped up in the emotion of that being the last time.”

The actor tells THR about his character and the final season:

Bill’s held many roles in the show’s seven seasons. What were your favorite storylines?

What I was attracted to in the script was a hint of darkness in the very nature of the thing that he is, and yet it was wrapped up in this enigmatic, rather quiet person. There will always be a part of me that’s — not smitten, but that first couple of years and the first year specifically was such an amazing ride, being able to make Alan’s dream, that crazy dream that he had that seems like a lifetime ago.

I was very unsure about the nature of where Bill was going in season three. He gets kidnapped by Russell [Denis O’Hare] at that point, and he becomes quite evil with Sookie, not telling her that he had been sent originally to procure her. I was pretty unsure. The way that they were sending him was really vicious with her, and then he has the creepy breaking Lorena’s [Mariana Klaveno] neck. It wasn’t that I didn’t want to play it — I was unsure of the motives behind it. Alan was fantastic and tried to explain it, and actually that incarnation of Bill I think probably remains my favorite. Of course, it was great fun to do when suddenly he was omnipresent and omnipotent. The thought of his power at that point, that’s very difficult to play, but I loved it.

Who is Bill this season?

This year, I think that the writers wanted to create an essence of that first season, that first couple of seasons where the show was smaller, wasn’t as multi-story-layered, and one of the things they did with Bill to make that happen was a sort of an echoing of his past. When he loses the power, all his powers, and he can no longer daywalk and everything is gone, he gets reset in a way. There was a really nice scene in episode one of this season that we cut out — it was Andy [Chris Bauer] and Bill driving in the car, and Bill is talking about this fact that he feels different, that he can kind of sense that there is something different about him. He’s thinking about the past, and one of the nice things it did was set up the idea that we were going to start seeing echoes of him.

Is there a common thread through his storyline?

I think the common thread that sort of runs through him is this desire to recapture his humanity, to find his what it was that made his heart beat. I think in that way he differs from most vampires, because vampires in their very essence are superior to humans, and this is why to other vampires he feels like an anomaly. I think that to other vampires the thought of wanting to go back to this weakness is insane, it doesn’t make sense. It’s frustrating that he feels like, “I am of this nature, I am of this frailty, and I want to rekindle that somehow.”

One of the things that Anna and I said — we had a dinner with Bucky [showrunner Brian Buckner] a year ago, before we had started filming, when they were just conceiving of this year, and quite frankly sat down with him and said, “We do not need in any way need you guys to try to tie up the Bill-Sookie love knot. If you don’t feel like that’s part of the show, we absolutely don’t need for it to be that.” I had said, “If you want that, we both do. If you see the show as Alcide [Joe Manganiello] and Sookie, that would be totally cool by us. If you see it as Eric [Alexander Skarsgard] and Sookie, that would be absolutely cool.” I certainly didn’t want to play an obvious part. One of the things we’ve been good at is surprising the audience, not always giving them what they want or expect. So for me, it’s been interesting to sort of find that character again. He’s been so many things. I think he’s had the most difficult arc in many respects, trying to find that sustenance and feeling.

What can fans expect for Bill in the finale?

At the end of [episode] nine, he has called Sookie and had the conversation with Eric, Eric’s gone back, and he knows that he’s going to talk to her. He’s going to see her, because she deserves it and is owed it, to know what’s been going on for him and why he is doing what he’s doing. We sort of enter into the episode right there.

Is there anything you wish the show had explored more fully?

I think that one of the first things that Alan said to me half of the show in, the first six episodes in is, “Is there anything you’re missing, anything you want to do, anything about the character?” I had said, “If I had been this person, if I had been alive for 100 and however many years, I would want to have read all the books that I could possibly have had, learned every language, and see all the great wonders of the world, but then, what is there left once you’ve done all that?” That boils down to the very essence of what a vampire is. They’ve done everything they could have done. Then — this is the interesting question — what is there left to do?

And there’s Bill and Eric. There’s moments where in Victorian times we’re together, and then we as an audience don’t see them again for a hundred years until they see each other in Fangtasia for the first time in season one. We always wanted to do something with, where did the animosity come from when they first see each other in Fangtasia? Where did that stem from? Obviously the scene between him and Pam [Kristin Bauer van Straten] from 100 years ago [in which Bill and Lorena visit Pam’s brothel] would not have been the reason for that animosity, it was just two vampires feeding. I had always wanted for us to see a flashback to that, and so that Alex and I got a chance to do more flashbacks together. That was where our characters differed from the human characters, where we got to play all those different eras.