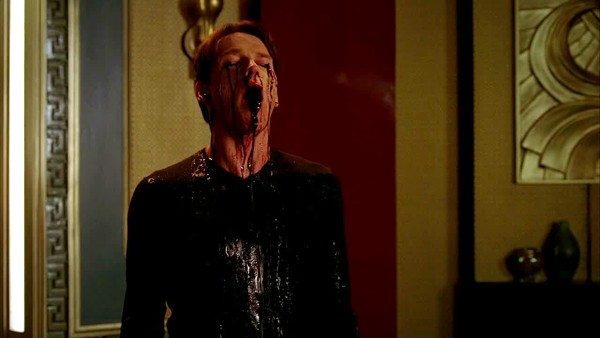 For almost two months we’ve been watching lots of torture, violence and executions on The Bastard Executioner, but let’s not forget that True Blood surely had it’s gore, too.

The southern-fried supernatural soap operatics of True Blood may have ended last year, but the show’s groundbreaking special effects live on in the VFX reel below that compiles the very best of Zoic Studios’ goriest contributions.

HBO’s cult horror favorite “True Blood” took the vampire craze by storm, with 12 million viewers at its peak and a blood-hungry fan following, and Zoic Studios was along for the ride from the dawn. From gushing facial wounds, flying decapitated heads, massive explosions, fiery slow motion attacks, gruesome disintegrating bodies, and of course—an infinite bounty of blood in every fashion imaginable. Coming on board for the pilot and continuing through the series’ finale in 2014, the Zoic team delivered a scintillating supply of ghastly effects that will leave their mark long after the last vampire bite.

Check out more about the special effects that the show perfected in the video below:

Somehow, I think the True Blood gore is more palatable because it’s part of the fanciful world of vampires and therefore not as real to us as the violence on The Bastard Executioner.  What do you think; tell us in the comments below.