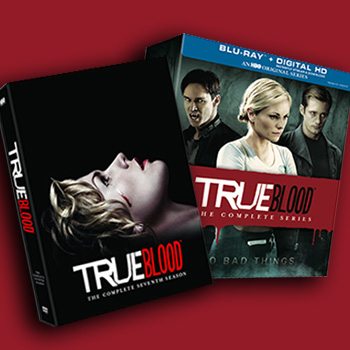 See the release dates below: 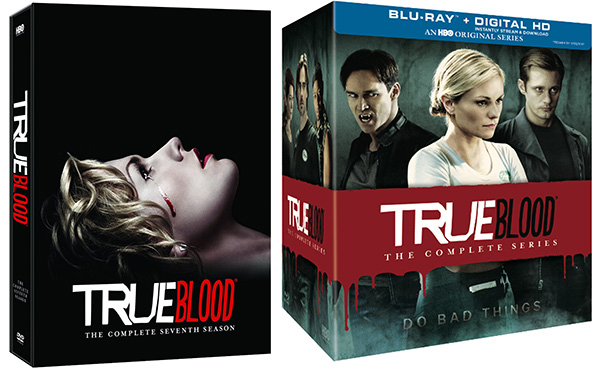 MAKE YOUR PURCHASE BY CLICKING BELOW

New York, N.Y., September 2, 2014 – Over the course of seven seasons, the sexy, scary, wildly entertaining hit HBO® series True Blood has kept fans on the edge of their seats with twists, turns and romantic entanglements for Sookie Stackhouse and her group of supernatural friends and foes. Created by Academy Award®-and-Emmy®-winner Alan Ball, the groundbreaking series will be released as a complete series set day-and-date with the seventh and final season box set, just in time for diehard “Truebies” to add to their holiday wish lists.

True Blood: The Complete Series, available on Blu-ray ($299.99), DVD ($249.99) and Digital HD on November 11, 2014,features all 80 episodes from the revolutionary series on 33 discs, packed with all of the bonus content from the individual season releases, including behind-the-scenes featurettes, a Snoop Dogg music video, Tru Blood beverage ads and 40 audio commentaries.The Blu-ray set also includes a Digital HD copy of all 80 episodes.

True Blood: The Complete Seventh Season will also be available on Blu-ray with Digital HD ($79.98) and DVD ($59.99) on November 11, 2014 and includes the full 10-episode final season, along with extensive bonus materials including behind-the-scenes interviews and never-before-seen content that gives viewers a look at the final days on set.

For fans who can’t wait until November to binge on the final batch of episodes, True Blood: The Complete Seventh Season will also be available to own on Digital HD September 22, 2014, a few short weeks after the series finale on August 24.

This is the first time in the series’ history that episodes will be available digitally so soon after airing on HBO!

Bonus Material
Bonus features for True Blood: The Complete Seventh Season include all of the exciting content True Blood fans have come to expect, while taking a special focus on the final days on set as cast and crew say farewell to the show:

About True Blood: The Complete Series
Thanks to a Japanese scientist’s invention of synthetic blood, vampires have progressed from legendary monsters to fellow citizens overnight. And while humans have been safely removed from the menu, many remain apprehensive about these creatures “coming out of the coffin.” In the small Louisiana town of Bon Temps, local waitress Sookie Stackhouse (Anna Paquin) is open-minded about the integration of vampires – particularly when it comes to Bill Compton (Stephen Moyer), a handsome 173-year old living up the road. But at the service of Bill’s less virtuous vampire associates, Sookie is drawn into a series of catastrophes that will put their love to the test.

About True Blood: The Complete Seventh Season
This year, a season-opening battle between raging Hep-Vamps and their Bon Temps prey sets the stage for a season-long series of hair-raising denouements for Sookie, Bill, Eric (Alexander Skarsgård), Jason (Ryan Kwanten), Sam (Sam Trammell), Alcide (Joe Manganiello), Tara (Rutina Wesley) and their human/vampire allies and adversaries. As we’ll see, some of True Blood’s most beloved figures will meet cruel fates, while others will cheat death (true and otherwise) to forge happily-ever-after relationships that will leave fans surprised and, ultimately, satisfied. What will happen to your favorite True Blood character?