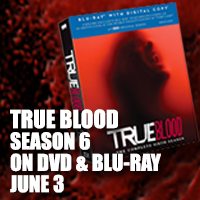 True Blood: The Complete Sixth Season will be available on Blu-ray with Digital Copy ($79.98), DVD ($59.99) and Digital HD on June 3, 2014, just in time for fans to catch up before the final season makes its HBO debut this summer. Both sets include the full 10-episode season, along with extensive bonus materials including behind-the-scenes interviews and never-before-seen content.

Packed with extensive audio commentaries and features that take fans even deeper into their favorite storylines and relationships, the sixth season’s bonus material offers an array of exciting content to keep even the most hardcore “Truebies” sated.