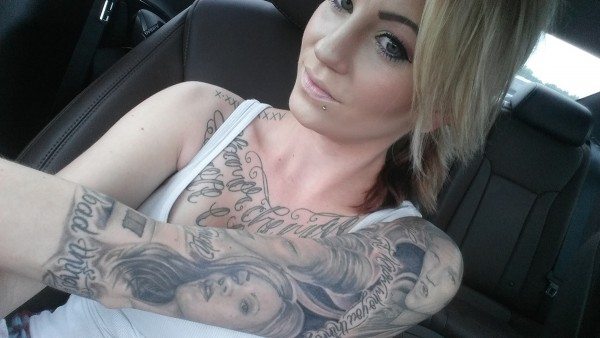 True Blood has touched many hearts, but for some the TV show has a greater meaning and the stories and characters touched them on an even deeper level. Twenty-five year old Jamie Pilar Worley loves her ink, so what better way to express her love for the show than by decorating her body with True Blood images?

“I’ve been modeling since I was 13 years old. I was hoping to get famous, but growing up in Alabama….that was very far fetched!”

After spending a big portion of her live in Monterey, California, she now lives in Huntsville again where she works as a dispatcher for the local police department, but continues to work as a (tattoo) model as well in her free time.

We asked Jamie for our sister site The Vault about her modelling work and of course about her True Blood tattoos, but wanted to tell her story also on AllStephenMoyer.com

The Vault: What is a tattoo model exactly?

A tattoo model to me is like a living breathing painting. Live artwork.

The Vault: For what kind of stuff do you model?

I’ve done fashion, glamour, t-shirt companies, and then tattooed modeling which is implied work to be able to see the body artwork.

The Vault: How many True Blood tattoos do you have?

I count my sleeve as 1 tattoo. It was broken up in many 7 hour sittings over 3 years, but at the end of the day it’s 1 big idea that I planned out at day one. 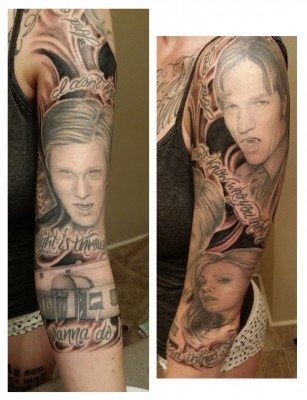 The Vault: What do they represent to you?

A very long story short, I related to Sookie. A girl confused about where she belongs in life. Trying to discover who she is as a person. Then finding love in 2 wrong people. People who she’d give her life for, but both people had demons that she could not fix. So, she chooses herself. Until the man which was everything good that she deserved came into her life. Someone who loved her probably more than she loved him, but he was what she deserved…..I had this same exact experience in my life. And for the longest I wanted a tattoo that would represent my journey but never knew how to design and describe where and what I went through. Then the show happened. I thought “Wow! This is my life but in a vampire, wolf, & fairy kind of way”.

The Vault: Can you explain why you chose these particular images?

I read the books before the show, and with descriptions of people your imagination creates many ideas of how someone may look…when the show came out, it put real faces to my many ideas of what the characters looked like.

The Vault: When did you get the first True Blood tattoo? And what was it?

3 years ago. We started with Sookies portrait and the Fangtasia building.

The Vault: Which True Blood tattoo is your favorite and why?

I have to say, my Merlottes sign. It was the one place everyone came together as one in the show. My favorite character is Eric and we all know why! 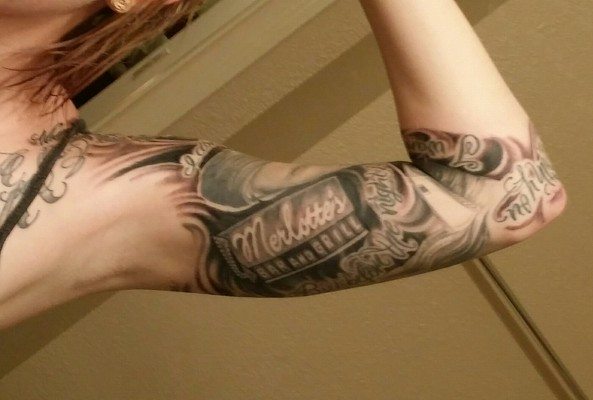 The Vault: Will you continue to add more tattoos even now the show is over?

Yes, now that it’s ended just as I hoped the ending would be…I think I’d like to end my sleeve in the same way.

The Vault: Does your husband ever get jealous when he sees Eric and Bill starring back at him from his wife’s body?

Haha! No but every now and then he will kiss Sookie, so I guess it evens the playing ground! Haha

The Vault: What makes True Blood so special for you?

Well I’ve always loved the living dead and mythological creatures, then relating to my journey that created who I am today just really made it hit home for me.

The Vault: What did you think of the series finale?

It ended the way it should. Everyone moving on with the cards that were dealt. Keeping promises to friends and loved ones that are gone to carry on that they were just that important of a person and to their life to not keep their word. Absolutely closed all ends the way a bittersweet love story should be ended. 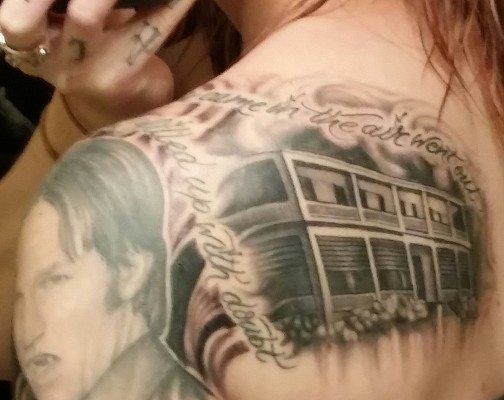 [sws_ui_icon ui_theme=”ui-smoothness” icon=”ui-icon-help”] [/sws_ui_icon] Do you also have True Blood tattoos?
Post your photos in the comments; we’d love to see them!