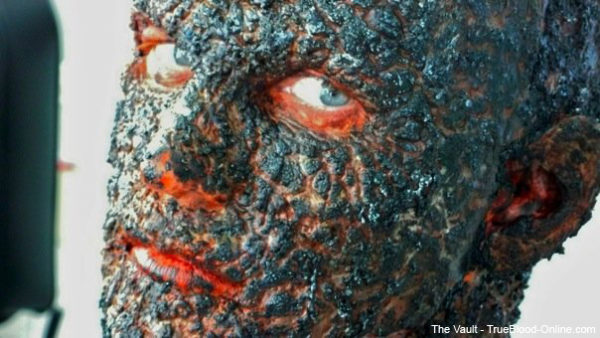 The scene from True Blood season 1 where Bill burns in the sunlight while attempting to save Sookie, was filmed in three stages and required full body makeup for each of the stages. To create the burnt vampire look a head mask cast was made by the special effects team of MastersFX.

MastersFX is an award winning prosthetics, animatronics and character effects company responsible for some of the most impressive, scary and gruesome scenes ever seen in modern movies.

“When you first have to have a head mask cast,” Stephen Moyer says, “I’ve done that a few times, and that’s quite claustrophobic. All you’ve got is a nose hole and everything else is covered—literally, 360 degrees, everything goes, and sometimes they’ll leave it on for too long and they can’t get it off, and they’re literally manhandling you to try to get the thing off, and because you can’t hear anything, everything’s inside your head, and it’s very odd.”

Worse, sometimes an actor can get stuck in there. “My sister was with me the last time I did it, and she videoed it. And they couldn’t get it undone and they had to go and get like a tire iron to get into the thing to pull it apart.”

Stephen’s sister Amanda was also present in the trailer when Stephen’s makeup for the last burning stage was applied. Because she saw it all come together from the beginning she didn’t have a problem seeing her brother reduced into a crispy bacon state. She did, however, have some trouble on the set watching the final moments of Rene in the graveyard.

The only one who didn’t seem to mind to any of the goriness was ‘a man’s best friend’ Splash. 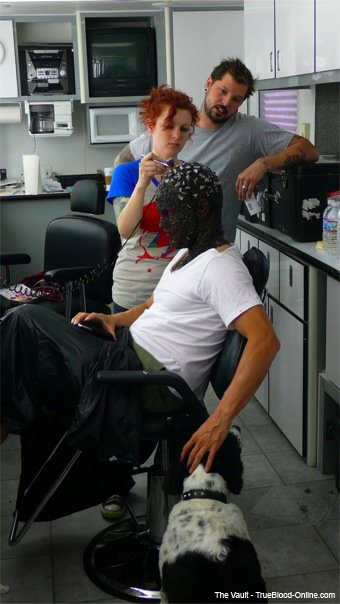 Amanda was so kind to share with us some of the photos she took that day in the makeup trailer.