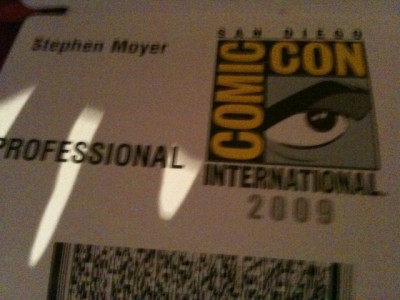 As you know, True Blood’s cast will be featured in a panel at this year’s San Diego Comic Con.  They are on the schedule for Saturday and below is the schedule of times you can see them.

2:30pm – 3:30pm Cast Signing Autographs – The cast of True Blood will also be in attendance for a mass autograph session that Saturday July 25th from 2:30pm-3:30pm at WB Booth 4329. The confirmed actors and creators include Anna Paquin, Stephen Moyer, Rutina Wesley, Michelle Forbes, Alexander Skarsgard, Nelsan Ellis, Sam Trammell, Deborah Ann Woll, Charlaine Harris and Alan Ball. If you’re a fan of True Blood this is definitely one event you will not want to miss at Comic-Con!

5:15-6:15 – True Blood Panel and Q&A session – Just as it seemed things were settling down in the backwoods Louisiana town of Bon Temps, deadly new twists and evil forces have begun to threaten Sookie Stackhouse and everyone around her. Mixing romance, suspense, mystery, and humor, True Blood kicked off its 12-episode second season on June 14 on HBO. The series, which earned a Golden Globe nomination for Best Television Series-Drama for its debut season, follows the romance between waitress Sookie Stackhouse (Anna Paquin, the X-Men films; Golden Globe-winner for True Blood season one; Oscar-winner for The Piano), who can hear people’s thoughts, and her soul mate, 173-year-old vampire Bill Compton (Stephen Moyer, The Starter Wife). Alan Ball (creator of the Emmy-winning HBO series Six Feet Under) created and serves as executive producer of the series, which is based on the best-selling Sookie Stackhouse novels by Charlaine Harris. The series also features Nelsan Ellis (The Soloist) as Lafayette Reynolds, Rutina Wesley (How She Move) as Tara Thornton; Sam Trammell (Medium, Law & Order: Criminal Intent) as Sam Merlotte; Michelle Forbes (In Treatment, Battlestar Galactica) as Maryann Forrester; Alexander Skarsgård (Generation Kill) as Eric Northman and Deborah Ann Woll (The Mentalist) as Jessica Hamby. Moderated by Kate Hahn of TV Guide. Ballroom 20

Check out the ID’s for Stephen Moyer and Alexander Skarsgård below: