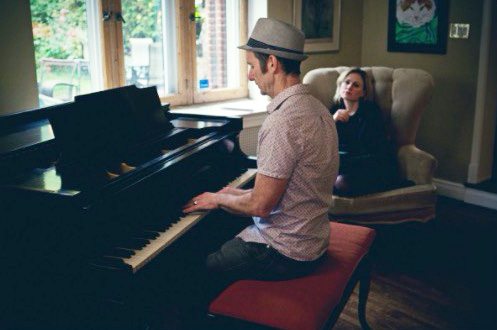 Steve posted the following information on his social media accounts today thanking the crew who helped “shoot the teaser:“ 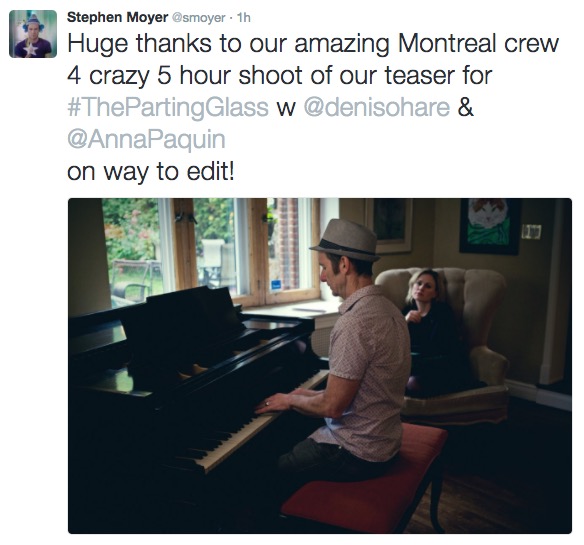 UPDATE, we have just heard from the Denis O’Hare Appreciation Group on Facebook, who got the answer from Denis O’Hare himself, that the title of the movie has been changed to be “The Parting Glass” and Anna Paquin will also star.  This marks the second film production of CASM films; their first being “Free Ride.”

The song, The Parting Glass seems to be an important song for Denis and we speculate that it just might be what he is playing on the piano in the photo above.

“The Parting Glass” is a traditional song, often sung at the end of a gathering of friends. It was purportedly the most popular parting song sung in Scotland before Robert Burns wrote “Auld Lang Syne”. The song is also popular in Ireland and among Irish communities. Read more about it at Wikipedia.com.

Stephen mentions that the teaser is on it’s way to “edit” so we look forward to seeing it soon and are eagerly anticipating learning more about this project.

We speculate that this might be the song used in their new film venture together, “ColumbiaTheMovie” or even, be a new name for the film.  However, it also could be for another project alltogether; we just don’t know.   However, as more information becomes available, we’ll certainly let you know.

Listen (and watch) Denis O’Hare sing “The Parting Glass” during an episode of “Seth Speaks” in 2014 below: