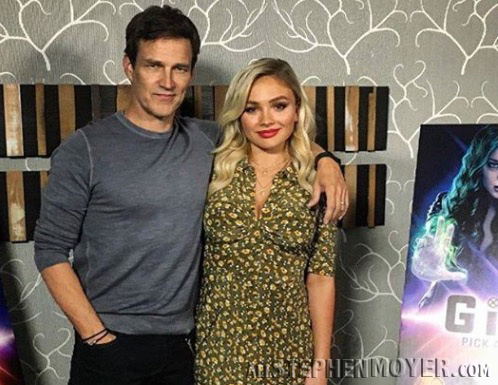 The Gifted Season 2 premieres on October 14 in the United Kingdom. Recently, Stephen Moyer and Natalie Alyn Lind traveled across the pond to London to do a press junket to promote the show.  Below is a portion of the Vulture Hound interview with Stephen and Natalie:

This interview was held in London with Stephen and Natalie about the upcoming season, and whether the theory of superhero fatigue is real.

Both sat with smiles on their faces, but it is safe to assume their characters in the show will not be smiling. Not only did the split at the end of season one create great intrigue for fans, but it also created great pain for a lot of the characters in The Gifted, including the Strucker family. So, with all the possibilities available for season two, we asked them what the most exciting part was about returning to the sets.

Stephen Moyer: “When I found out about one of the things that was going to happen, I was slightly concerned about the why’s and where’s and how’s,” Stephen explained. “Not because I was not excited about how it was going to manifest, but because I wanted to make sure we nailed down the science. I come from a genre TV show [True Blood] where Alan Ball nailed down every single question, so we always had an answer for every question that comes our way. So Matt Nixon and I worked out exactly what happened, and made sure there was a real throughline.”

One of the big things in the trailer for the new season is Reed Strucker unlocking his powers. These powers were suppressed by his father at a young age. Stephen discussed the struggle his character will face because of this.

Stephen Moyer: “If you had been forced at age 15 to stop being who you felt like you were destined to be, and then you found out 30 years later what had happened. Would you be happy or do you wonder who you would have been if you were just allowed to be?” he said. “So that’s the thing Reed’s been wrestling with over the hiatus between the two seasons.”

For Natalie, she told us that the most exciting part for her was the evolution of her character Laura. “Last season my character always had her stuff together. I think this season, she’s not just trying to get her mind right, but she’s also trying to help her family as much as possible. She also has a constant uncomfortable feeling about this darkness inside of her, and how much it takes over.”

Laura Strucker’s darkness comes from her great-grandparents, who were viewed as terrorists because they used their power for evil. This story continues to play out in season two, and it’s something both Natalie and Stephen found out on a step by step basis.

They revealed that the scripts for every episode were not handed out in one go, which presented some interesting challenges for the actors.

Stephen Moyer: “If you look at someone like Ken Loach, who only gives his actors the pages that they are doing that day, so you don’t know what you’re shooting the next day because you’ve never even read the script. It’s interesting, isn’t it?” Because you are actually just working “in the moment” with what you’ve got, and that’s amazing. Is it nice to know what the goal is at the end of it? Yeah. But if you don’t know it, it makes you pick apart what you do know more intensely.”

Natalie also explained how it leads them to ask a lot more questions. “It’s also questioning our writers because sometimes they’ll have us do a subtle look, and you’re like, ‘why am I doing that?’ (laughs) because that’s not a natural thing that happens to me.”

The Gifted’s second season is also a reminder of how this current landscape of film and television. It continues to be dominated by the superhero genre. Some members of the media believe audiences have had enough, and superhero fatigue has set in.

For Stephen, it comes down to taste. “I like them, and I think there is a place for them, and I do not believe they will go away. Personally, if a big superhero movie was playing over there and a one million dollar black and white movie in Swahili with subtitles, which was four hours long, over here, I’d go for the latter. It’s just what I’m interested in. I’m far more interested in independent filmmaking and storytelling about the real world.”