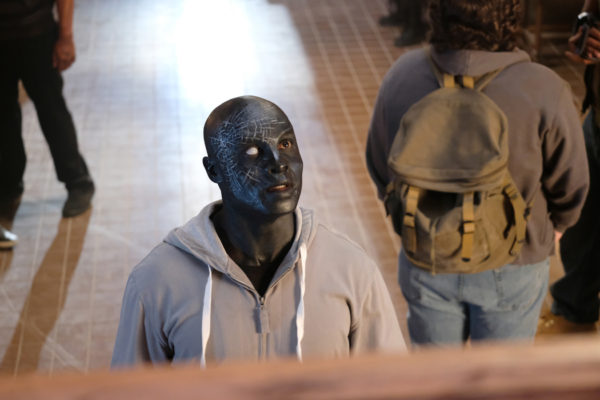 Below is the “synopsis” for the fifth episode of The Gifted titled, “boXed in” on Fox which will air on October 30th at 9:00pm.

The description of the episode is below.

Motivated by a tragic event from his past, Jace throws all the power of the Sentinel Services into finding the Mutant Underground Way Station. Meanwhile, Blink’s vivid dreams lead her to confront Dreamer (guest star Elena Satine) in the all-new “boXed in” episode of THE GIFTED airing Monday, Oct. 30 (9:00-10:00 PM ET/PT) on FOX.

Unfortunately, no photos of Stephen Moyer have yet been released for this episode. However a new guest star Jermaine Rivers enters episode 5 as a new mutant named “Shattter” and is pictured below.

Here’s some info about Shatter from Wikipedia and how he is part of the X-men world:

Shatter, a teenager living at home with his father, attempted suicide in response to his mutation activating. He attempted to shoot himself in the head, not realizing his mutated body made him virtually invulnerable. The bullet left a massive, cracked depression on the side of his head, without doing any mortal damage. Shatter ran away from home, and at some point joined up with the Postman’s Morlocks. Sometime later, a mutant-hunting Sentinel robot blasted Shatter, blowing off his right arm.

In the wake of M-Day—an event in which a mentally ill Scarlet Witch de-powered over 90% of the mutant population, Shatter was one of the many who lost his powers. The energies of his powers were detected in The Collective.

See additional photos from this episode at xmentv.com