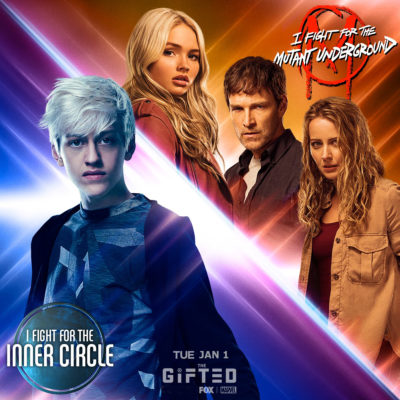 THE GIFTED SEASON 2 RETURNS ON JANUARY 1.

Over at Cartermatt.com, they have some info about what’s coming up on The Gifted season 2 episode 10 when it returns on January 1?

They say: When the show returns on January 1, they’re in the home stretch of the season and things are only going to get more intense and relationships more complicated. Yet, at the same time, we also don’t want to lose sight of the fact that one of the most important components of this entire show is the Strucker family. They were one of the selling points at the start and entering this episode, it does feel like we’re gearing up for some sort of reunion. Andy’s going to express some different feelings, the sort that could end up bringing the family closer together.

Yet, at the same time, what this episode could also eventually reveal is that things here are not going to be altogether cheery even in the event everyone does reunite. There are still going to be some emotional rifts that need to be resolved, and maybe this episode will at least set the foundation for bringing people back together.

Read The Gifted season 2 episode 10 synopsis with some other news when it comes to what’s next:

The Mutant Underground wrestles with the idea of recruiting the Inner Circle to assist them. Andy considers reconnecting with his family when he learns about his father’s powers, but Lauren may not be as willing to have him back as their parents. Find out if the Mutant Underground and Inner Circle will be able to put their differences aside in order to save John from the Purifiers in the all-new “eneMy of My eneMy” winter premiere episode of THE GIFTED airing Tuesday, Jan. 1 (9:00-10:00 PM ET/PT) on FOX. (GIF-210) (TV-14 L, S, V)