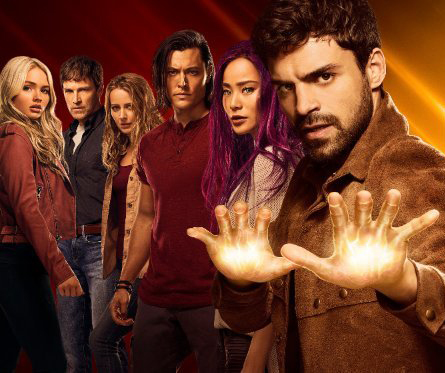 In this post, we share The Gifted’s new Key Art, as well as more about Season 2., It appears that The Gifted Season 2 will have lots of changes.  We’ve already reported about some of those changes, but now there’s even more.

The Dawn of the Mutant Age is nearly upon us and it looks like it will start with a struggle.

Here are two versions the official KEY ART posters that have been released by Fox. The artwork hints at the coming struggle in the mutant community as new factions have formed. One one side is the Mutant Underground, still working towards the X-Men’s dream of peaceful co-existence. On the other is the Hellfire Club, ready to fight for mutants by any means necessary.

And another version of the same poster. Click on the image to see a larger view: 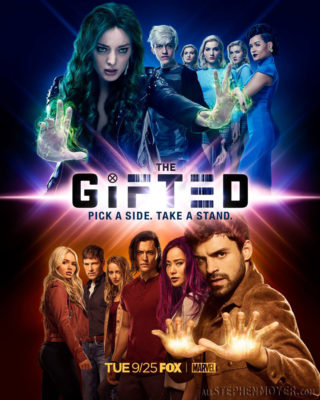 So, the group from Season 1 has divided into two separate factions. Also, in Season 2 we expect to learn more about Thunderbird’s past.

On the Mutant Underground’s side is Lauren, Reed (Stephen Moyer), and Caitlin, Thunderbird, Blink, and Eclipse.  John Proudstar, played by Blair Redford, serves as the leader of the Mutant Underground. He was an invaluable hero to his fellow Mutants over the course of the first season. John Proudstar is well-suited for battle and leadership. He was even left in charge of the team specifically by the missing X-Men. However, there’s not much we know about his past life, besides that he has a history of military service.

On the Hellfire Club’s side is Polaris, Andy Strucker, the Frost Sisters, and Reeva Payge. Reeva is a newcomer, a mutant with powerful sonic blasts that scramble the minds of others. She also has a mysterious history with the Hellfire Club and will help guide those mutants who defected in The Gifted’s Season One finale.

In that finale, Polaris took drastic measures to stop Dr. Roderick Campbell’s attempts to take his mutant-hunting Hound program national, destroying the airplane carrying Campbell. The action led to her defection from the Mutant Underground and to her allying herself with the Frost sisters and their Hellfire Club. Polaris brought several members of the Mutant Underground with her, including Andy Strucker.

And, there’s even more:

According to Jamie Chung, who plays Blink in the series, we’re going to see more of John’s backstory during the second season of the show. Speaking with TV Guide, the actress said, “You’ll get real insight to something really quiet and intimate about Thunderbird and Blink… In Episode 3, lots of things are revealed about his past.”

In the comics, John Proudstar joined the X-Men as Thunderbird during a mission to save the original team from Krakoa in Giant Size X-Men #1. Created by Len Wein and Dave Cockrum, the character would only last until Uncanny X-Men #95 (only two issues after Giant Size) before dying trying to bring down Count Nefaria. The character is one of the notable few to never really be resurrected outside of specific crossover stories.