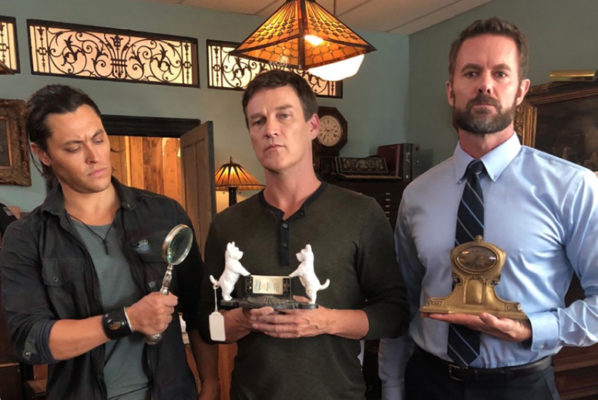 The lovely writers of The Gifted have been kind enough to share, via their Twitter account, a few behind the scenes photos from this week’s episode 8 of The Gifted starring Stephen Moyer. Since we think this episode was the best yet and there are so many photos, we’ve decided we’d make a special photo gallery!

We say “Thanks” to the writers for sharing them with us!

Below are two of the behind the scenes photos (click on them to see a larger view). In the first one, it looks like the cast is studying the script before filming.  But we especially like the second one because it is so cute! It shows Steve and his fellow cast members each holding an antique from Otto’s Chattanooga antique store. No surprise that Steve chose the dogs! We’re wondering though why they have such “grumpy” faces on.  I guess they are trying to be serious antique dealers or something!

Sometimes I prefer seeing the “behind the scenes” action because it can be almost as good as seeing the finished product.  Do you agree?

See more photos by clicking on the button below!

The Gifted 1.08 Behind the Scenes Photo Gallery
The Gifted Season 1