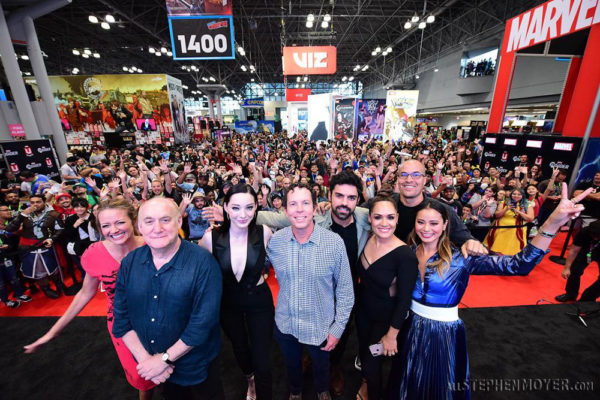 As all the Stephen Moyer fans know, last weekend Stephen attended the Mill Valley Film Festival with Anna Paquin and Denis O’Hare (see our coverage of the festival here). Because of this event, Stephen was not able to join his fellow The Gifted cast members at the New York Comic-Con, which took place at the same time.

Last year Stephen attended NYCCC with the rest of The Gifted cast members and I’m sure he was missed this year. However, the show was well represented by fellow cast members Jamie Chung, Coby Bell, Sean Teale, Amy Acker, Grace Byers, Emma Dumont, and Show-runner, Matt Nick. They appeared on stage to offer fans an inside look at season two of The Gifted, which is currently airing on Fox. 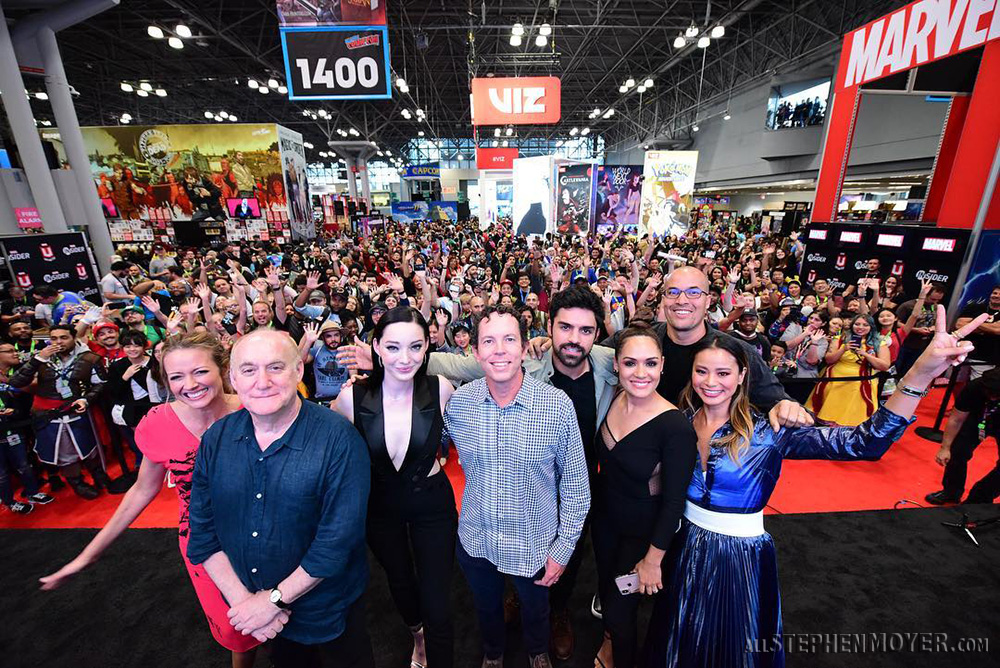 Matt Nix, Executive Producer/Showrunner started the panel by talking about the two biggest changes in Season 2:

“The two biggest things this year are… there has been some turmoil in the news lately. Something about a divided country. The world of the X-Men is something that reflects a lot of the things that are going on in our world,” Matt explained. “We really wanted to use the show as a window onto what’s going on in our world right now. One of the really exciting things years is to see the rise of a divided country. We’re going to deal with the rise of the Purifiers.”“The other big thing that’s been fun this year is doing deep dives into our characters,” Matt continued. “We’re going to meet young Polaris this year. We’re going to see the history of the Frosts or the Stepford Cuckoos. We get to see the background and where the people are coming from for everyone on stage… Really focusing on the characters and what they want and who they are.”

During the panel discussion, Nix said “traditionally, the world of the X-Men reflects issues of our own world,” and for that reason, they wanted to depict societal divisions more this season. For “The Gifted,” that means looking at how everyone in the world of the series is divided over mutant issues, while there are also divisions between the Inner Circle and Mutant Underground… along with the rise of the Purifiers.

On top of that, Nix said they were doing a lot of deep dives into their characters this season. This will include looking at the younger version of Polaris and Blink. It will also include the history of the Frosts. The intent was to show “their background and where these people are coming from – really focusing on the characters and what they want and who they are.”

Grace Byers said that will include Reeva, including her “Past and history, which you will get a chance to see.” From that, we’ll learn, “Why she’s so passionate to take the route that she’s taken.”

Sean Teale and Emma Dumont spoke about the split between Eclipse and Polaris, now that she has joined the Inner Circle. They love each other but have opposite views on how to best help their people, and Teale noted, “The difference between Polaris and Eclipse are those differing ideologies.” Teale said it’s possible Eclipse might start listening “to that voice in his head” and do something more extreme in his quest to be reunited with the woman he loves and their baby.

Asked how Polaris and Eclipse would react if their child was a human, not a mutant, both Teale and Dumont agreed they’d both love her no matter what. Dumont said she actually felt, “They would be grateful if they had a human child,” knowing life would be easier for her. “I think it would be a positive reaction.”

Jamie Chung said that for Blink, “The ideology of what she truly believes will come into question” as Season 2 continues. Regarding the introduction of the Morlocks this season, she noted, “There’s something really appealing about their society and how they live and are able to be themselves.”

It’s been revealed by Nix previously that we’ll see Jace Turner become involved with the Purifiers. Coby Bell said that for Jace, he feels he has no one to help him as he seeks justice for what happened to his daughter when “Along come the Purifiers.” Added Bell, “He goes down a dark, dark path this season.” He also noted, “I don’t think he necessarily agrees with the Purifiers, he just needs them.”

As for Caitlin, Amy Acker remarked: “it’s been a rough road” for her.  She tries to find her son, Andy, while Reed is keeping secrets from her. Acker said Caitlin is “ultra driven to find Andy, but in the meantime has neglected some other members of her family.”

When an audience member asked if we might see Caitlin get “more badass,” Nix replied, “ Yes. You don’t have Amy Acker on your show and say ‘Don’t let her be badass!’”