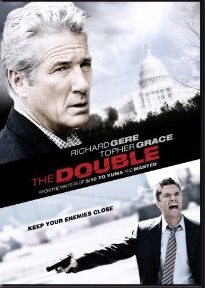 Stephen Moyer’s film ‘The Double’ is due to have a limited release in theaters on October 28, 2011 (yes, another revision to the release date).

However, Amazon is already offering the film to be pre-ordered on DVD or Blu-Ray.

The DVD and Blu-Ray will be available on January 31, 2012. Click on the Amazon link below to pre-order your copy.

Here’s a synopsis as shown on Amazon:

The Double has plenty of action, switchbacks, and double-crossing drama to satisfy the most jaded action fan. Director Michael Brandt (making his directorial debut) cut his writing chops on such fast-paced fare as 2 Fast 2 Furious and the remake of 3:10 to Yuma, so he’s right at home moving the plot along at a feverish clip. Richard Gere is enigmatic and just sympathetic enough as Paul Shepherdson, a retired CIA operative who’s brought back into action after the assassination of a United States senator to help track down his long lost (and supposedly dead) Cold War nemesis. He’s assigned by his boss, authoritatively played by Martin Sheen, to work with a rookie agent, Ben Geary (Topher Grace, who can hold his own against these film lions just fine, thank you). The Double has elements of the best buddy flicks, a little bit of the Bourne films, and more than a little homage played to The Usual Suspects. Stephen Moyer plays a very believable menace to the free world. But is he the dreaded Cassius? As the tension rises and the plot thickens, one wishes Gere had a bit of a harder edge–like, say, a mid-career Harrison Ford or Samuel L. Jackson. Yet in some ways the “soft” casting of Gere helps keep the plot aloft. The Double is a perfect popcorn spy caper that will have the viewer guessing until nearly the end of the film. But will that be too late? —A.T. Hurley

Purchase The Double by clicking below.