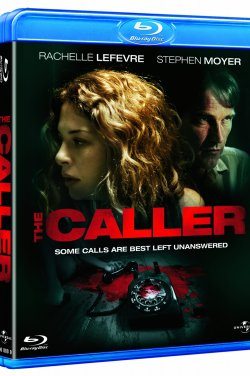 The Caller to be released on DVD! The Press Release states: In the tradition of Drag Me To Hell and When A Stranger Calls comes, the  US release of the suspenseful, supernatural thriller The Caller haunting DVD and Digital will be on October 4th from Sony Pictures Home Entertainment. Rachelle Lefevre (Twilight) stars with Stephen Moyer (TV’s “True Blood”) and Luis Guzmán (Arthur, Taking of Pelham 123) as a young woman in Puerto Rico desperately trying to escape a supernatural force. Bonus materials include deleted scenes, an alternate ending and an interview with Director Matthew Parkhill.

Synopsis
Troubled divorcee Mary Kee (Rachelle Lefevre) is tormented by a series of sinister phone calls from a mysterious woman. When the stranger reveals she’s calling from the past, Mary tries to break off contact. But the caller doesn’t like being ignored, and looks for revenge in a unique and terrifying way. Also starring Stephen Moyer (HBO’s “True Blood”), Lorna Raver (Breaking Waves) and Ed Quinn (TV’s “Eureka,” “True Blood”).

The DVD will include the following special features:

Not just the film, but the special features included on this DVD make it a must buy for all the Stephen Moyer fans!