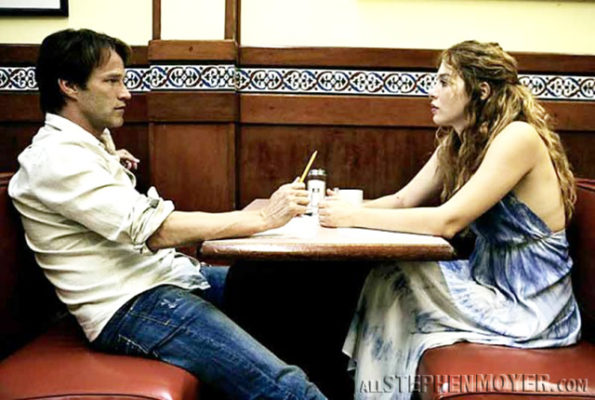 Below is a new interview with Stephen Moyer about his new film, The Caller which opens this Friday, August 26.  In this interview with Fangoria.com, Stephen talks about how the tension in the film was created “the old fashioned way” through the camera, performance, music, and lighting. He also talks about his co-star Rachelle LeFevre and his director Matthew Parkhill both of whom he became good friends with and wants to work with again. He also discusses True Blood and this season’s King Bill and his relationship with Jessica. 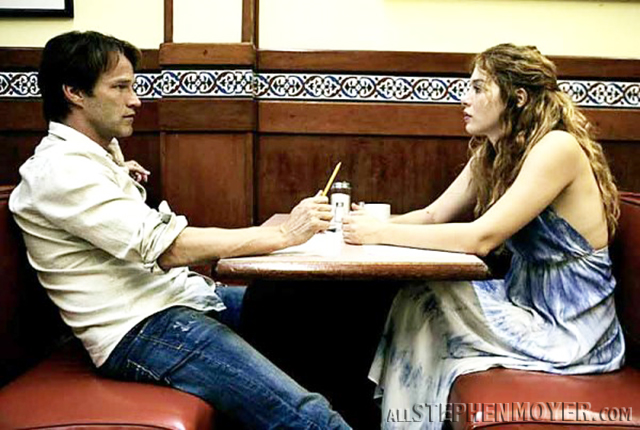 FANGORIA: Tell us about your role in THE CALLER.

STEPHEN MOYER: I play this character named John Guidi, who teaches mechanical engineering. And he first meets Rachelle Lefevre’s character, Mary Kee, when she comes into his class by mistake. We learn that he’s single. He’s a fairly simple guy who’s been brought up in Puerto Rico. We don’t get to learn why he’s single or what happened to him, because the story is told from Rachelle’s point of view. He becomes sort of a big part in her life and what is going on for her. And he tries to help her work out what on Earth is going on!

FANG: What attracted you to Sergio Casci’s script?

MOYER: It was very tight; there were no extraneous scenes. Everything leads on in a very beautiful way. I love old-fashioned film-making, and this is, in many ways, kind of an old-fashioned film. It’s done on film, not on digital. It’s shot without any special effects. It creates tension through the camera, performance, music and lighting. And it felt really great being a part of it. We had an incredible time.

FANG: The characters, John and Mary, have an emotional arc where they are supportive and compassionate toward each other. How did you and Rachelle build this emotional bond, creating the chemistry between you?

MOYER: When we got together, we sat down with the director, Matthew Parkhill. We tried to make sure that everything we were doing had a reason to be there, that there was nothing extraneous; that it was organic. When I watched the film, I felt that you really believe the genesis of their relationship. You really believe she’s not ready for him, but she ultimately has nowhere else to turn. He’s the first kind presence for her in a long time. It’s like anything that you do with a director: Who am I? Where am I? What am I doing? What is my reason for being in this scene? For every scene we did, Rachelle and I would sit down with Matthew and talk about what we were trying to achieve with that scene.

It’s a great shame Rachelle can’t be here for this interview. She’s working. She is phenomenal in this film. It’s an amazing performance. This will do wonders for her because she’s brilliant in it.

FANG: How was Parkhill as a director?

MOYER: Matthew thought a lot about the way he wanted to make the film look. One of the characters in the movie is Puerto Rico, San Juan. We’ve never really seen that in film. There’s an amazing scene in the cemetery. One expects Puerto Rico to be sunny, hot and beautiful, [but here] it’s gray, raining and wet. That kind of dank feeling he infuses is another character in the film. The telephone is another character. Every corner of the frame has something going on. We became good friends while working on it, and we’re planning to hopefully work together again. After seeing it, I’m going to force him to work with me again. He’s got a wonderful eye.

FANG: THE CALLER shot in 23 days. To make a movie that quickly, was it easier to work with a TV veteran like Parkhill?

MOYER: You know, it’s interesting because 23 days is four and a half weeks if you’re doing five-day weeks. And that’s fairly long these days. My wife [Anna Paquin] is in the middle of shooting a film that’s on an 18-day schedule. You just have to work hard. Budgets are not what they were; either you get no money or you get an extraordinary amount of money. You know, movies these days seem to be under $5 million or $100 million. There doesn’t seem to be any middle ground anymore. Matthew, like any other director these days, is aware of his constraints, and he’s gotta work; he’s gotta make it happen quickly. Honestly, I happen to think that it’s a positive influence on actors and on a crew. You have no time to stop. You gotta keep driving away at it, and that can create really good work.

FANG: In TRUE BLOOD, you are mostly working on soundstages. THE CALLER was filmed on location in Puerto Rico. Did the setting have an influence on your performance?

MOYER: I think so. The apartment block and that little area we were filming in were very evocative. The way it was lit, I’m sure it’s not like that usually; it was quite spooky. It’s all about creating tension, obviously; that helps. We play around with the idea of heat a lot in the movie. Rachelle’s air-conditioning unit is broken down; it’s sticky. It’s about trying to create the idea of that heat for the audience as well. It gets the audience thinking, “My God, I’m feeling uncomfortable.” The clamminess is another character in the film. Ultimately, they built the apartment in a studio, so we did some interior work because it’s easier to do that, because of lighting and sound. But the stuff we did on the road gives the film an authentic visual style.

FANG: Though your screen time is short in PRIEST, you create sympathy for the character of Owen Pace, right until his dying breath. In THE CALLER, John is a sympathetic, likable and good-natured gentleman. Is that quality difficult to convey to viewers?

MOYER: It is because I’m horrible and so I have to work at being empathetic. It’s been an interesting two or three summers for me because I’ve had big jobs that have fallen through because of budgetary stuff. And that happens; everyone goes through it. So what ultimately has ended up happening, I’ve gone into these films and done the odd bit here and there. That’s a lot of fun. You turn up and you have to concentrate. My work on THE CALLER was nine days. My work in PRIEST was four days. So it’s a lot of fun to be thinking about your character and then going in to hit it. I don’t necessarily think to myself, “I want to make this character sympathetic or empathetic.” You go in and you play what it is that you’ve been given to do.

In this instance, John is a gentle, kind soul. I was probably drawn to that. Even when you’re playing a vampire for most of your existence, Bill has this humanity to him. I was attracted to the fact that this guy is warm. We did play with the idea of making him nasty so that the audience is constantly thinking. But the problem is, there’s so much going against Rachelle’s character. We give her this one thing, something warm to her, it makes it more realistic.

FANG: In this season of TRUE BLOOD, the dynamic between Bill and Jessica has developed into more of a father/daughter relationship.

MOYER: I’m glad you picked up on the Jessica thing. That was really some of my favorite stuff this year. Deborah Ann Woll is wonderful, and to get to work with her…we really love each other. To be able to do anything with her always makes me happy. I’m really pleased to get to do that. She’s going to have a very long career. I love what they’ve done with Bill and her. In my head, at the end of season three, my feelings about it were that if I had one thing left, it was Jessica. Bill almost feels like he’s dying. He’s lost Sookie; he’s lost everything. But the one thing he’s got left is Jessica. Obviously, I don’t get to write the scenes. I don’t really get the choice on what to create. I was really glad when they put us together. I try to convey that he’s got this one connection, that sort of daughter connection. That’s been a lot of fun this year.

But also, at the same time, he’s been given this power, this importance. He doesn’t want to abuse it. He has to make some difficult decisions like any politician does. That’s been a lot of fun too.

FANG: What are you working on now?

MOYER: I am going home to London for a few days to do some press, then flying back to LA to do a film called EVIDENCE, which is another little thriller. It’s really good, a great script. And again, going in for a few days on that, at the beginning of September. I’m really excited about that. It’s with me and Radha Mitchell, who’s a friend of mine anyway. I haven’t worked with her in a while, so it’s going to be really nice to do that. I’m still waiting on a couple of other things, some offers in, but I’m waiting on other stuff before I make any decisions.