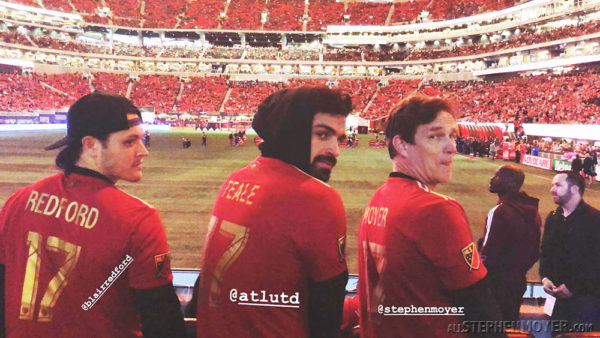 Atlanta United FC is an American professional soccer team based in Atlanta, Georgia. The team began play in 2017 as a member of the Eastern Conference of Major League Soccer (MLS). As Stephen Moyer fans know, he is a huge European football fan (known as soccer in the USA). So, last night, along with co-stars, Blair Redford and Sean Teale, Stephen attended a playoff game for the Atlanta United FC in Atlanta, the city where they are currently filming Season 2 of The Gifted.

About the Atlanta FC

The second-year soccer team won a playoff game for the first time at home resoundingly.  This resulted in its first-ever playoff series.

The team even scored multiple goals over the course of regulation time – in every way, penalty shot, free kick and a full-bore Josef Martinez blast – another playoff first inside Mercedes-Benz.

You must give Atlanta United credit for the way it went about dispatching New York City FC in the conference semifinal. Really, you must. Even if you consider soccer some sort of international conspiracy.

The 3-1 victory over NYCFC Sunday – completing the playoff sweep – was anything but careful and conservative.

Atlanta now will travel to New York to begin the away-and-home, two-game conference final Nov. 25. They’ll face a Red Bulls team that compiled the best record in MLS this season, and beat United 2-0 in late September.

Watch two of their videos below where the boys got to see the Falcons locker room
and Stephen Moyer showed off his “juggling” skills.: