When Bill’s body got jumped by 3 bloody women with enormous bushes, I feared that these Lilith wannabees would take over his body and mind and use him as a tool for their purposes. I was glad to see that this was not the case and Bill has not become a puppet of Lilith.

Bill can feel the pain of all the vampires in True Blood, he sees images of vampires being whipped with chains, set on fire and being dragged behind a car. Bill is crying and very upset that he is incapable of helping these poor creatures. Jessica holds him as he collapses to the floor into a catatonic state. In another dimension of his mind Bill is lead over a green meadow to meet Lilith. She tells him that it is beginning and that events have been set in motion. “A tyrant is rising; it is the beginning of the end and you must complete my work.” She also explains to him that she is no god and neither is he; there is no god but God. 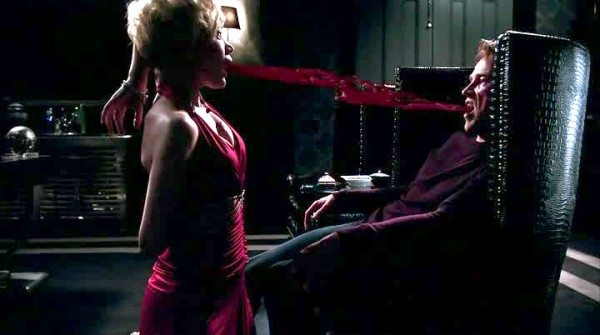 It’s day in the meantime and Bill has been in this state for hours and Jessica is getting desperate. She got him a woman to feed from the Human Edibles service, but Bill still doesn’t even do so much as blink. When the woman is about to leave something really weird happens. Her body twist and turns in all kind of very unnatural and extremely painful positions while she is drawn to Bill. After he put her in front of him with the power of his mind, he sucks her dry in the most disturbing way, while Jessica freaks out completely. I really feel for this girl, she stood by her maker, but she has no idea what he is capable of.

When she comes back from burring the body, Bill is still in the same state and she tries to talk to him to try to get through to him. “You said you could feel the pain of all vampires? I was wondering if you could feel mine.” In her desperation she wonder if he is Lilith or if he is God and she gets down on her knees and prays to Bill as if he was God. She asks him to bless her friends and watch over them.

In the meantime Lilith tells Bill that he must save all vampires and that he will know what to do. Bill snaps out of his catatonic state and the TV turns on, they see a news item about a vampire being dragged behind a car. The visions that Bill have, are not visions of the past, but visions of the future. One of Bill’s new powers is that he can see the future. And it ain’t pretty. We see Jessica, Tara, Pam, Eric and numerous other vampires in grey jumpsuits, locked up and being burned by the sun.