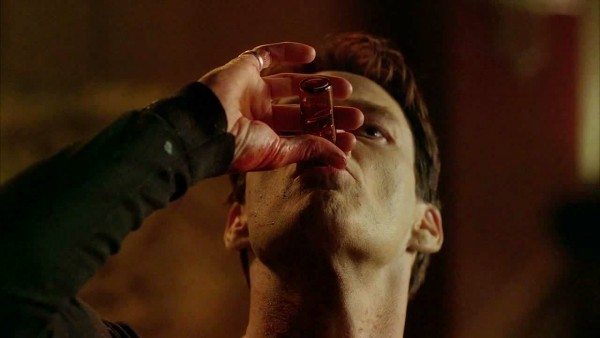 Season 5 has come to an end with what is probably the bloodiest finale ever in the history of True Blood. The Bill scenes had me on the edge of my seat throughout the episode because it has been clear for the past couple of episodes that his storyline would not have a happy ending this season. I was pretty sure that Bill would not come to his senses in the arc of season 5, but I never expected the cliffhanger scene that Alan Ball has left us hanging with for the next 10 months. 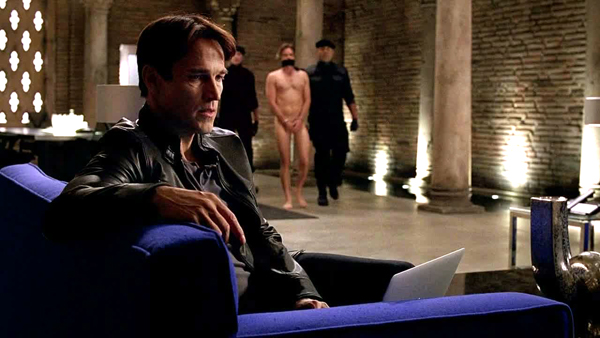 Let’s start from the beginning. While Bill awaits his breakfast being brought up to him, he continues to hear the call of Lilith in his head urging him to drink all of her. Bill is still hesitant and seems unsure what to do. He is not pleased at all when Sam Merlotte turns out to be his breakfast and blames the guards for not smelling the difference. Sam explains that Luna’s daughter was kidnapped by Steve Newlin and they just want to get her back. But according to Bill, Sam knows too much now and he can’t trust him on his word that he will never tell. Bill pops his fangs ready to attack Sam, when the shifter does his thing and shifts into a fly and flies off. Bill tries to catch him, which turned out to be a pretty funny scene with Bill jumping around from the chandelier to the wall and back, but Sam escapes through the ventilation duct.

In the meantime Eric has staked Russell and is now at Sookie’s trying to convince her to come to the Authority HQ because she is the only one that might get through to Bill, having a faerie vagina and all. 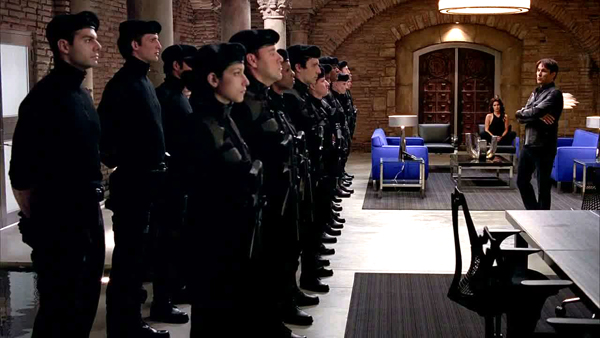 Bill calls all the security guards in the main chamber and lectures them on how security has been breached and the remaining chancellors and the blood of Lilith has been put in jeopardy. He calls the blood God’s blueprint for vampires. He orders the guards to scour every inch of the building looking for rats, mice, flies and cockroaches and killing whatever they find.

After the guards have left the room, Bill and Salome remain alone. She asked him if he has seen Kibwe and he confesses to her that he found him in the blood shrine earlier, where Kibwe was about to drink the sacred blood because Lilith appeared to him and told him he was the chosen one.

“So I killed him. Because Lilith appeared to me.” Bill kneels in front of a very anxious looking Salome. “She said you were chosen. She told me to serve and protect you. She said you were the prophet for the new age.” Bill bows his head in submission. Salome is overwhelmed by her emotions, she is jubilant now that she is officially the chosen one and has Bill to serve her. 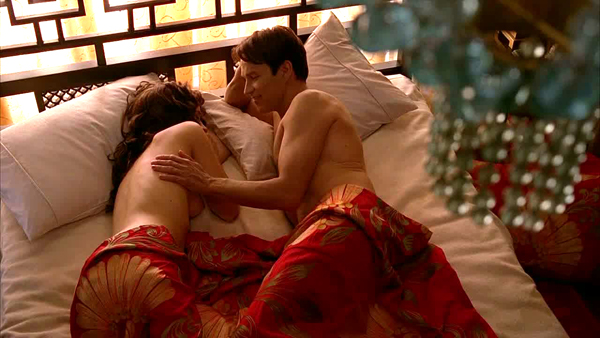 And he does just that in the next bedroom scene of them together. “My beautiful prophet.” Bill is playing Salome like a fiddle, telling her exactly what she wants to hear and giving her a false sense of security and making her believe that she can trust him completely. Not so smart for someone that old, it’s not like she wasn’t betrayed before by someone she trusted and she played the exact same game on Roman.

Eric and Nora bring back Sookie, Jason and Tara to the Authority HQ, tied and gagged in the back off a pickup truck. Bill sees them coming in on the security monitor. When he sees Sookie gagged in the back, he knows that the shit will hit the fan soon, big time, and he looks concerned and tense. He also sees on the monitor that Salome is going into the blood shrine, he watches her intensely: it’s showtime. Salome runs off with the blood vial when Eric, Nora, Sookie, Jason and Tara storm out of the elevator and start shooting vamps, causing the security protocol to initiate. 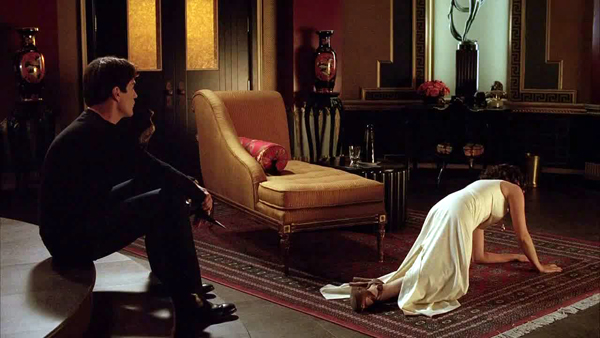 While Sookie and Tara free Jessica and Pam from their cells (nice kiss ladies!), Bill goes to Salome in her chamber where she is all dolled up for the occasion to finally drink the blood of Lilith. She realizes that Bill wanted this for himself but Lilith in her wisdom wanted the strongest. Salome is ready for the rapture and she drinks all the blood while Bill watches her with a sly look on his face. The fact that he doesn’t make any attempt to stop her, made me understand that it was not Lilith’s blood she was drinking. Bill continues to look at her, closes his eyes for a moment and a smile comes over his face, he has won.

While Salome vomits blood all over the carpet, Bill sits on the steps to her bed, stake in hand and explains to her how her monumental narcissism caused her to be so impatient for the rapture that she didn’t even smell the silver he had put in the blood she drank, which was of course substitute blood. Bill put the real blood in another vial. Salome knows that she has lost and she stretches out her arms as Bill straddles her, putting the stake in position on her heart.

“Lilith chose wisely.” Bill drives the stake through Salome’s heart. He rises and takes the vial out of his pocket and the moment he is about the open it, Eric and Sookie storm into the room. 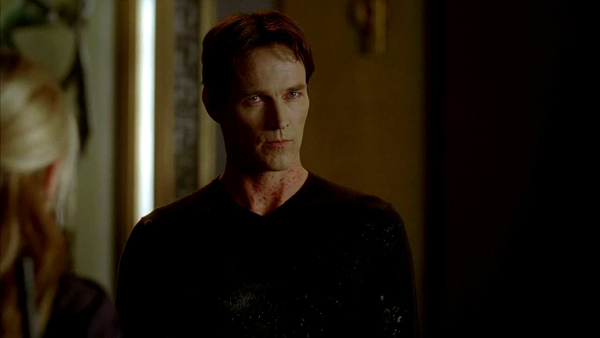 Bill assumes that Lilith appeared to Eric as well and he is there to claim the blood for himself. But Eric only saw her savagely obliterate his maker.
“She’s a mad god, Bill. She’s nothing but destruction. Don’t do it.” When Bill won’t listen, Sookie steps in. “Bill this isn’t you.”

“What the fuck do you know about me? For all you know, everything I did while with you was an act calculated to elicit a particular response.” Sookie looks at Bill in horror, this is not the Bill she knows, the man she loved and whom, she knows, loved her deeply. Bill is ice cold and calls her an abomination. Sookie walks over to him and says: “Bill, you are stronger than this. You are capable of sympathy and kindness and generosity. You are unique among all the vampires I have met. Don’t throw that away.” Sookie has tears in her eyes.

Bill stares at her and starts a monologue that much resembles what I said about Bill feeling liberated in last week’s Bill Chronicles. “I have spent my entire life as a vampire apologizing, believing I was inherently wrong somehow, living in fear – fear that God had forsaken me, that I was damned. But Lilith grants us freedom from fear.”

When Bills starts quoting the vampire bible Sookie and Eric realize that they will not be able to convince Bill that what he is doing is wrong. Sookie gives it one more shot: “If I ever meant anything to you at all…”

Calm without taking his eyes off her, Bill tells Sookie: “I told you the first night we met….vampires often turn on those they love the most.”

Not exactly correct. That first night he tells Sookie that “Vampires often turn on those who trust them”. Can we understand from this alteration that Bill still loves Sookie deeply?

Love or not, Bill opens the vial and drinks all the blood of Lilith. Eric and Sookie watch in shock as he empties the vial. Just seconds later Bill starts to convulse and blood starts streaming from his eyes and pouring out of his mouth. Something is terribly wrong. “Oh God”, he moans in pain and fear. Bill’s face becomes a mask of streaming blood. “OH GOD” he screams in total distress. Bill’s head explodes and what is left of him falls to the floor in a pool of vampire goo and blood. Our beloved Bill has met the true death and is no longer. 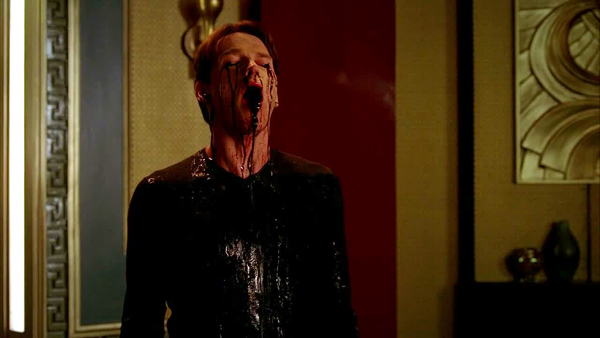 For a moment there I thought Alan Ball had pulled a Nate Fisher on us again.

Eric stares in shock and disbelief, Sookie starts to sob and holds on to Eric for comfort. Holding her, Eric looks at the pool of blood on the floor and notices that it is starting to move. He points it out to Sookie and together they watch as Bill rises up from the pool of blood in full terminator style; naked and all covered in blood just like Lilith was. He looks at Eric and Sookie and growls at them viciously, fangs out. “RUN!” Screams Eric to Sookie and they both speed out of the room. 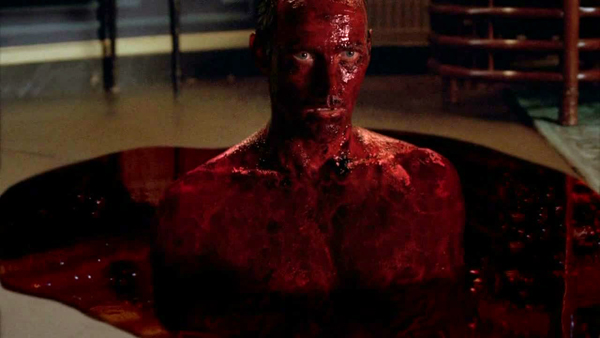 What is Bill now? His body disintegrated in a pool of goo, so he did indeed die the true death, but there is no way of telling who this transformed Bill is, what he will be like and what he is capable of doing. Is he like Lilith? All covered in blood he sure resembles Lilith, but we have no idea who or what Lilith is either and there is no telling if Bill will be like her.

Lilith could only be seen by those who tasted her blood, but reborn Bill could be seen by Sookie, so he probably is a completely new entity.

Alan Ball told TVLine that Bill is still Bill but he is a transformed Bill. He is not a completely new person. It’s not like his memories or his experiences have been left out and he’s just a baby.

Stephen Moyer told TVLine that it would be safe to assume that what we thought was Bill is no longer Bill.

As usual anything is possible on True Blood and we will just have to wait and see what will happen with Billith. It is at least very reassuring that we will not have Lilith in a Bill suit. We will all speculate endlessly about all the possibilities of what Bill will be like in his new form and I am pretty sure we will come up with some very plausible and some bat shit crazy theories. Maybe he will be the villain of season 6, maybe there is a cure, maybe he will transform again, he already did it twice in his life now. There is no telling what will happen next.

It will be a very long 10 month wait, especially for us Bill/Stephen fans. Speaking as a Bill fan, I mourn the loss of the Bill we have loved for so long, as at this point he seems to be lost to us forever. It is the end of an era and we will all need some time to wrap our head around that and come to terms with it.

Speaking as a Stephen fan I am looking forward to see what crazy stuff there will be in store for him next season. It will be a whole new challenge for Stephen to sink his teeth in and I am sure he will do a phenomenal job as always. Is it June 2013 yet? 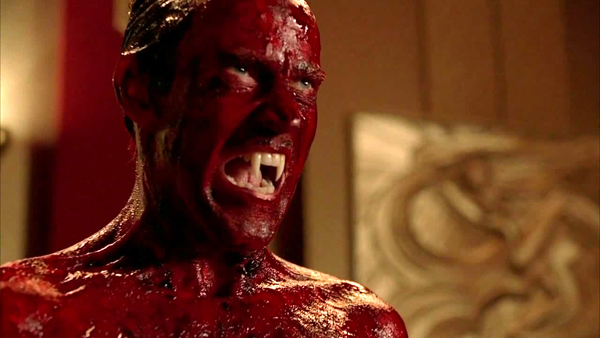