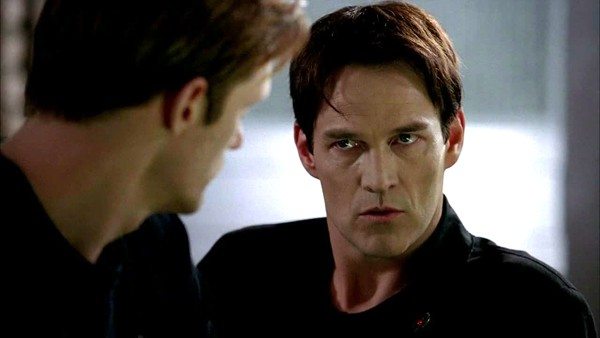 With all 5 Tru Blood factories destroyed and vampire attacks up with 50%, the world is quickly becoming a very dangerous place for humans but also for vampires. The already fragile relationship between the 2 species has now become outright hostile, as mainstreaming seems a thing of the past and anarchy rules between predator and prey.

Molly, with iStake on chest, is brought before the Authority Council. Salome and Bill both stand up and approach her, it’s obvious that Bill has taken the second position of power within the council. Salome wants to give Molly one last chance to accept the word of Lilith, but Molly understands that she will be killed whether she does or doesn’t. Bill confirms that unfortunately they must as she has compromised security. The chancellors have agreed on the true death for Molly. Molly’s last words are truly words of wisdom and I couldn’t agree more with her: “You are destroying the world based on a book that is thousands of years old. You call that evolved?”

The look on Bill’s face when he arms the iStake is one of regret, he feels sorry for Molly, but since Bill is so far gone I believe he feels sorry for the loss of her soul and not so much for ending her life. When Bill presses the button he shows complete determination and it’s not until Molly’s bloody remains lay at his feet, that we see a glimpse of compassion for the girl on his face again. 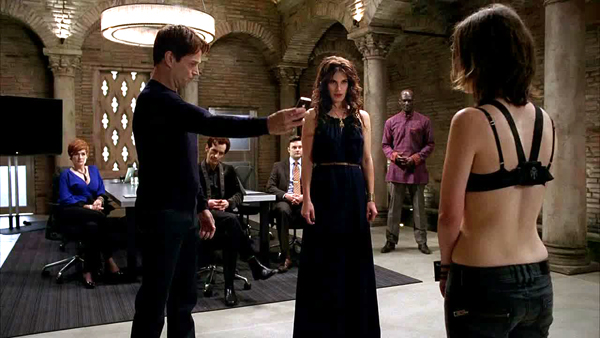 The growing tension between Russell and Salome builds up even further when Russell takes Steve out for dinner against Salome’s wishes, since Steve has to prepare for a big TV appearance. Russell clearly has no respect at all for Salome or the word of Lilith and, as we all know, has only boarded this train on account of his own agenda. Bill watches while Russell disrespects whom now seem to be the two most important women in Bill’s life. It’s difficult to read his expression. Tension is the word that comes to mind.

Next we see Bill in the sacred chamber where he takes the vial with Lilith’s blood out of the showcase. He carefully takes a few drops of blood in the pipette we’ve seen handled by Roman some episodes ago. For a moment he is lost in thought, until he hears the guards bringing Eric into the council’s room. Eric looks like he has been tortured and is forced on his knees.

Bill tells Eric that he and Nora can only keep him alive for so long, the other chancellors wanted him executed already. Good to see that Bill has not forsaken Eric completely and that he is trying to save his life. But Eric has to accept Lilith or he will be put to death. Eric prefers death over Lilith and asks Bill why it matters to him.

“You have saved my life and in return we will save your soul.” 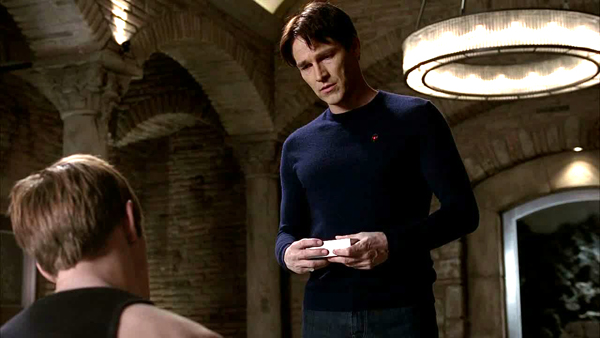 Nora and Bill force a couple of drops of Lilith’s blood down Eric’s throat. Nora takes a few drops as well, they will meet Lilith together. Bill caresses Nora’s hair and leaves them alone in the room, he goes to a control room where he watches the brother and sister on the monitor as they wait for the drugs to kick in and Lilith to appear to them. But it’s Godric who appears, not Lilith. Bill watches on the monitor as Eric and Nora talk to Godric, but since he has not taken the blood, he cannot see the hallucination. Godric says that he has evolved and that it’s not him who must fight Lilith: Nora and Eric should. Lilith kills Godric by ripping his throat open and she remains covered in his blood. Godric’s children mourn him and cry for him. Bill followed the whole scene anxiously on the screen and smiles with relief when he understands that Lilith has prevailed. “Praise Lilith”. He even says it to himself now when he is alone. I want to take the vampire bible and slap Bill over the head with it until he comes to his senses.

After glamouring Hoyt into forgetting all about her and Jason, Jessica hangs around the Compton Mansion when a security team sent by Bill comes to collect her. Bill has a great urgency to bring Jessica to New Orleans, because he even uses the phrase: “as your maker I command you.”

In the meantime a newly reformed Eric is presented to the Council. Eric proclaims his faith in Lilith and kneels before Russell and forgives him for slaughtering his family. I don’t believe for one moment that Eric really has seen the light, I think he is just saving his ass in the only way possible. 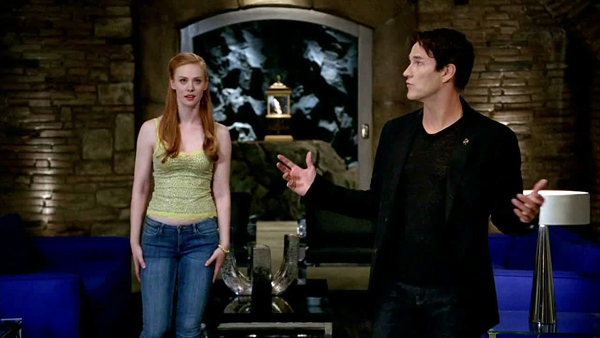 Bill welcomes an anxious Jessica into the Authority headquarters. He tried to keep her out of it all, but it’s too dangerous in Bon Temps for her now, being on her own and a room has been prepared for her in the underground bunker. Bill gives Jessica a tour and speaks with great admiration about the history of the vampires and the Authority as he shows her the council’s room.  When Jessica asks him how he got put in charge, he tells her that he and the others were chosen.

“What… you mean… like by God?
”“Suppose we were. Nine million species on this earth and here we are at the pinnacle of the food chain. Were we not chosen by nature or fate or by some great deity?”

Jessica represents what all Bill fans are feeling right now: WTF Bill! Jessica already had a religion-obsessed father and she is not happy at all to see her maker going down the same path. Bill tells her that he read the vampire bible with an open mind and that his world is full of wonder and mystery again. That confirms my theory that Bill was indeed lost and in desperate need to believe in something, anything at all to give direction to his life and meaning to his suffering. Bill hands the bible to Jessica and urges her to read it as well.

“Soon you’ll see that you and I and even Eric were meant to lead our kind into the coming age.” I wonder what the coming age will be like for us humans. Will we be farmed as food for the immortals? Enough book talk. All smiles Bill caresses Jessica’s face and asks her if she wants to see her room. Jessica smiles back, but is utterly confused about what is going on with Bill, the Authority and the new age that is coming. 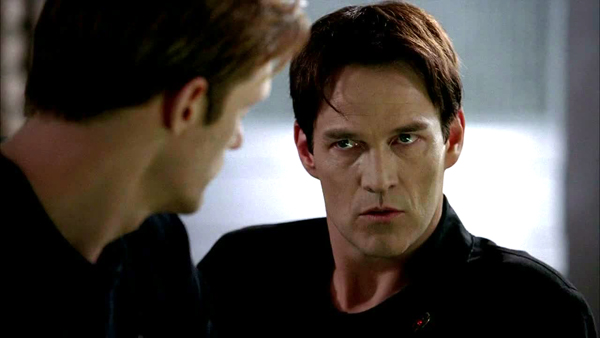 In the next scene we see a Council meeting in action discussing vampire educational reformation. I am surprised to see that Jessica is allowed in the room, listening in on Authority and their plans for the future. Eric participates actively in the discussion; the only one who is not interested is Russell. Russell hasn’t forgotten his dream to daywalk and brings up the issue with the other chancellors. Bill understands immediately where this is going: Sookie and he looks extremely alarmed. Also Eric casts a glance in Russell direction when he says that the blood of the Fae allows them to daywalk. It was Eric who gave Russell the idea in the first place and let him have his first taste of Sookie and experience the power of her blood.

“Compton, Northman, you both drank from the same faerie I have.”

Bill shifts uneasy in his chair and also Jessica looks up alarmed from her bible reading. Eric reminds him that the effect only lasted for a few minutes, but that doesn’t discourage Russell at all. He suggests they study the blood, capture another faerie and breed them. Bill and Eric exchange a very worried and intense look and I see an understanding again between them. They both love Sookie and will protect her.

Salome disagrees with Russell, saying that vampires are of the night and that the sun is forbidden for them. Fairies are an abomination. I must say that this Lilith religion is really starting to irritate me, I didn’t expect such a rigid, short sighted and narrow minded religion for vampires. In the end they are not that different from humans: killing in the name of their god and taking no responsibility for their actions since everything is god’s will.

Looks like Russell agrees with me as he launches Salome across the room when she threatens to put him back into the ground. Bill and Eric pop their fangs, but know that they won’t stand a chance against the 3000 year old Russell, nor will the other chancellors. Russell will no longer be Salome’s lapdog, I am surprised he played the role for as long as he did. Russell will have the sun and speeds out of the room leaving all chancellors behind in shock.  Bill and Eric know that Russell will go after Sookie and they both look extremely worried and shocked. Will Sookie be the one to breathe new life into the bromance and snap Bill out of his religious delusion?