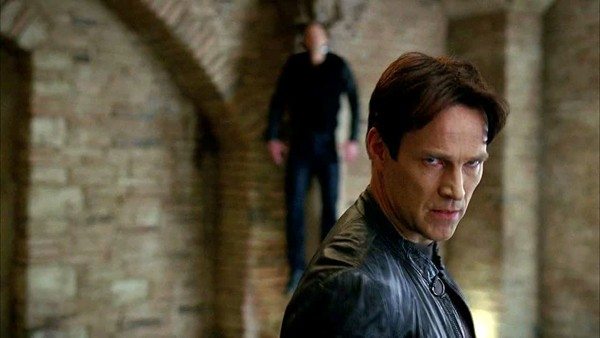 The episode picks up in the chaos of the Authority council room where a security protocol has been activated after Russell staked Roman into the afterlife. The ex-king of Mississippi doesn’t waste time and goes after Eric immediately, but instead of killing him he hangs him to dry on one of the columns. Bill can’t see what is going on and he calls out to his friend fearing for his life.

All bets are off now, Russell is secured but also Bill and Eric get locked up again. In their cell they speculate who could have dug up Russell. The boys are a bit slow figuring out the mystery and drawing the conclusion that Nora must have had an accomplice, most Truebies already figured out a couple of episodes ago that it was Salome. 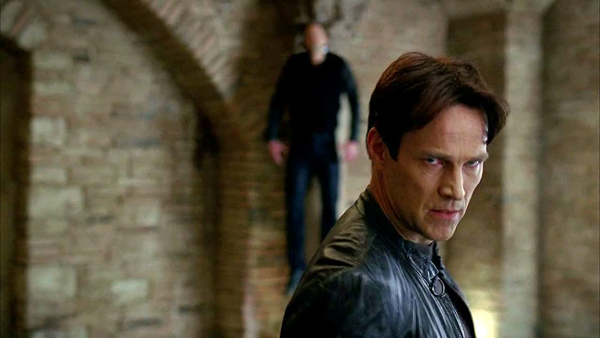 When Kibwe comes to take Bill and Eric to see Salome, he addresses them as King Compton and Sheriff Northman, so at least they still have their titles and positions, not that it means anything behind silver bars.

King and sheriff are greeted by Salome, Nora and Russell and they eye the trio with great suspicion. Russell wants to kiss and make up with Eric, forgive and forget what has happened between them. Bill and Eric exchange a very meaningful WTF look, what is going on here? When Bill asks Russell why they should believe him, he gets interrupted and ignored completely by Russell who addresses Eric; the more powerful vampire and the one he has had beef with. Bill is clearly to no importance to him in that moment, Russell wants a stage to exhibit the new reborn him and his newly found “faith” in Lilith. Russell suggests that they  forgive and forget what has happened between them.

Salome explains how what happened with Russell and Roman was inevitable. If I’m not mistaken we hear Bill say “bullshit” for the very first time: refreshing. Salome insists that she wants to share the power with everybody, but both Bill and Eric stand by their beliefs and refuse to join their party. The look on Bill’s face, while he proclaims his belief in mainstreaming, shows that he realizes that this could very well be the end.

“I still believe that without peaceful coexistence between our species, neither species will survive. Mainstreaming is the only way.”

But Salome gives them another chance to reconsider and participate in the ceremony that will be held the next night. 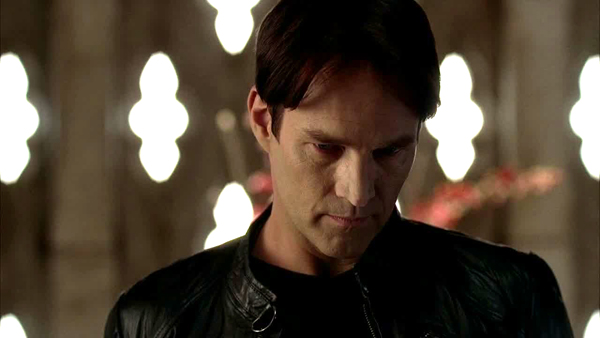 The next night they gather in the room where the blood of Lilith is kept. Unlike Roman who believed it to be symbolic, Salome and Nora are convinced that the flask indeed holds Lilith’s blood. Bill and Eric exchange several worried looks, this just can’t end well, Russell confirms their fears by beheading Dieter when he opposes to drinking from Lilith. That gesture convinces everybody to take a zip of Lilith. Bill is worried what the blood will do to them, but according to Eric it’s vampire blood and they are vampires, so the blood will have no effect on them. But the blood has a huge intoxicating affect on everybody he drank it. The vampire party cruises New Orleans drunk and high; laughing, hungry and dangerous. Bill jumps on the hood of a taxi because the driver honked at them.

“We will walk where and when we want. These streets are yours no longer.”

He bursts out laughing and catches a piggyback ride from Eric while looking around in utter marvel at the world around him. 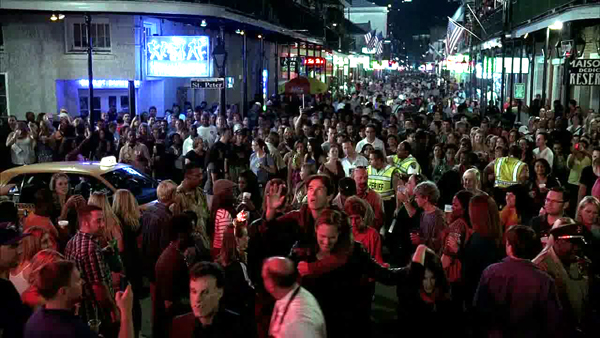 They end up in a karaoke bar where a wedding party is celebrating. Just gotta love Russell this episode, how he owns every scene he is in. The vampires lose control completely and drain all the wedding guests, during this bloodbath Lilith herself makes an appearance. She rises from the blood, naked and nasty with perfectly groomed pubic hair. It’s not until Godric appears to Eric and snaps his progeny out of it that it’s made clear that Lilith is nothing more than a collective hallucination: she does not exist. It was hard to watch Bill fall back into his old behavior, even if it was under the influence of a powerful drug, it’s not likely that his maker will rise from the dead to snap him out of it. If Lorena could see her William like this she would be so proud of him. 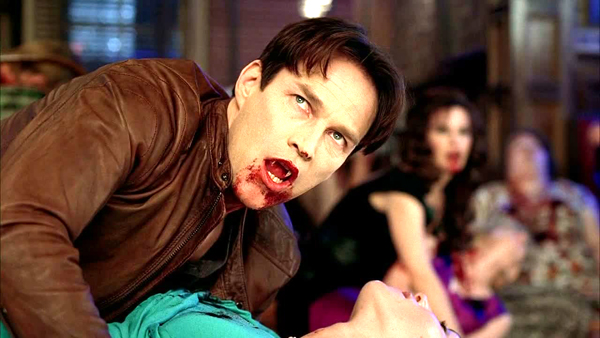 So what was in that flask? Vampire blood? As Eric explains vampire blood would not have had such an intoxicating effect on them, making them lose all sense of reality and letting them embrace their murderous nature again without regret or remorse.

My best guess is that it was fairy blood they drank, from an ancient and very powerful fairy. Eric acted the same way when he drank Sookie fairy godmother in season 4, but he had to drink the whole fairy to get that drunk. Now they only took a few drops each and are as high as they could possibly get. That was some very powerful blood they consumed and I can’t wait to learn whose blood it is.