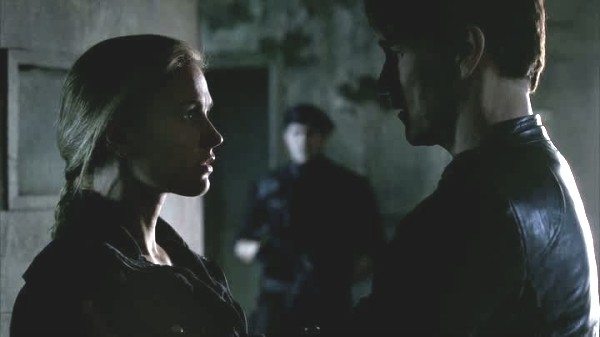 In the asylum Alcide is being dragged off by a nasty looking werewolf and chaos is complete when more wolves jump out of the morgue (recognize the Six Feet Under set?) and start attacking Bill and Eric. Russell sees opportunity to go after Sookie for a taste of fae, but she lightballs him across the room in defense. Eric is more than ready put an end to Russell once and for all, but Bill stops him for turning Russell into goo.

“He dies, we die most certainly. Maybe you are ready to die. Maybe you’re just bored after a thousand years. But you do not make that decision for me.”

At that moment the Authority makes its entrance in the person of Kibwe and he makes it very clear that they will take over from here.  Russell spits literally on the Authority and the believe in Lilith while he is taken away to the New Orleans headquarters.

To explain the presence of Sookie and Alcide, Eric comes up with the story that they found them humping each other like livestock in the van that they stole and Doug was there to show them the way because he had been in the asylum before. Bill and Eric convince Kibwe that there is no need to dispose of the humans and the wolf and that a little glamouring will take care of them. 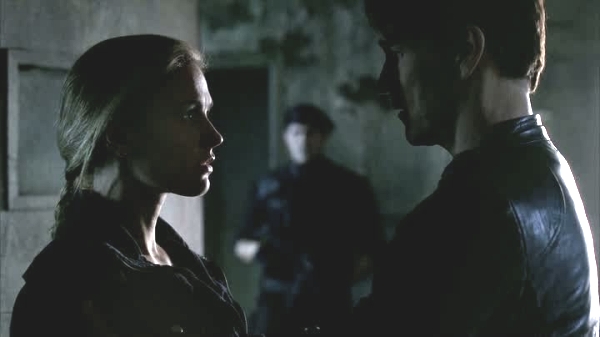 What follows has to be one of the most touching scenes of all the True Blood seasons we have seen so far. We all know that Sookie can’t be glamoured but because the guards are watching he pretends to do it anyway and seizes the opportunity to give Sookie one last message straight from his heart.

“You will remember nothing of this night, nothing of me or Eric. It will be as though we never met. And you will live your life as you were meant to live it. In the sun. With others like you. Human.”

With tears in her eyes Sookie responds to Bill’s nod, showing him that she understands that this is where their ways will part forever.

Eric takes care of Alcide’s memory of that night, he adds that Alcide will always protect Sookie with his life.

“But you’ll keep your hands off her, romantically speaking. She kind of disgusts you.”

While Sookie and Alcide drive home, Kibwe guides Bill and Eric in the back of a van assuring them that the Guardian will be extremely pleased that they managed to apprehend Russell, nobody expected that they could actually do it. If Lilith wants it they will not be executed, Kibwe says. Eric has enough of all the religious talk, but Bill goes with the flow to cover his ass.

There are more secret Sanguinistas inside the Authority than Roman thinks. Kibwe is not interested at all in hearing the stories of the surviving humans about the woman who was there and fed so many others to Russell. Instead of glamouring the humans Kibwe kills them all off. At this point I wonder if there is even one chancellor left who stands with Roman. 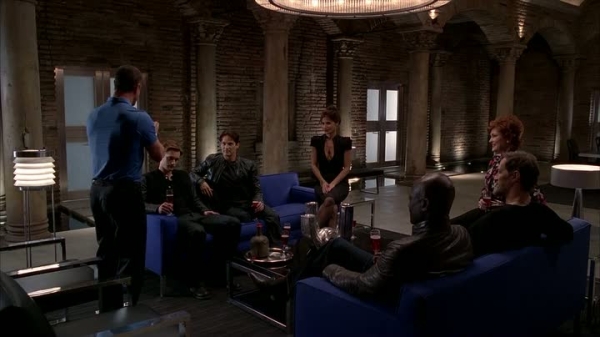 Back at the Authority headquarters Bill and Eric are greeted with smiles and congratulations of all the chancellors. Their iStakes are removed and they join the toasting and celebrating. Salome has been interrogating Russell about who released him from him concrete prison in the first place. Salome praises the boys, but according to Bill “it was their duty”. Nice to hear the boys getting at each other again: “Boy scout”, “Delinquent”.

Roman walks in with a bottle of 18th century Austrian hemophiliac blood to celebrate. Bill and Eric are now officially the guys who took down Russell Edgington. They take the compliments with smiles, their executing seems to be off the table completely and good fortune smiles upon them again. Roman knows now that they do believe in coexistence with humans. “Wholeheartedly” confirms Bill. Eric can’t go any further than admitting that there have been certain humans he has felt protective towards in the past. When Eric continues saying that he was never very religious, Bill starts to look very worried, talking the talk for ass covering is not something that Eric does. But when Eric adds that as long as the human affairs don’t personally impact him, he remains a pacifist. Roman sees right through the indifferent attitude however and recognizes that Eric does believe in something other than himself. The moment of tension is gone and the backslapping and toasting continues. 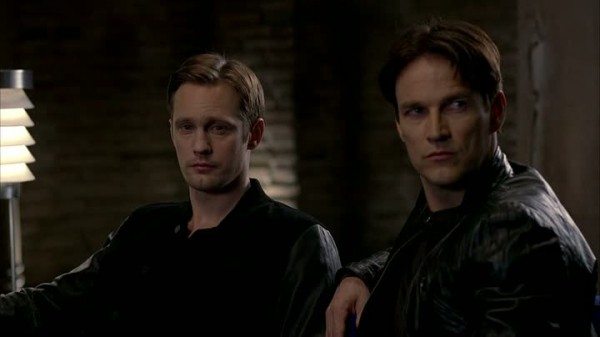 Roman has decided that Russell will be executed that same night, the only one objecting is Salome, more information might be obtained from the prisoner.

Eric requests permission to visit Nora in her cell and reveals to Roman that she is his sister. Bill looks like he would like to disappear under the couch they are sitting on. He clearly did not expect Eric to reveal the family ties and it worries him deeply what might come from this. But they will attend the execution of course, Bill adds he loves a good execution. They both can’t wait to see the end of Russell of course.

Bill and Eric watch quietly as Russell is brought  before Roman and the council. Both vampires are extremely powerful and on completely opposite sites, but it’s Roman who holds the iStake app that has the power to end Russell’s life. Russell looks defenseless kneeling down in his white pj’s and Bill braces himself when Roman points the remote control ready to activate the iStake. The iStake malfunctions and in a matter of seconds Russell has Roman pinned down and drives a stake through his heart. Bill and Eric exchange a very meaningful look: the shit has just hit the fan big time. 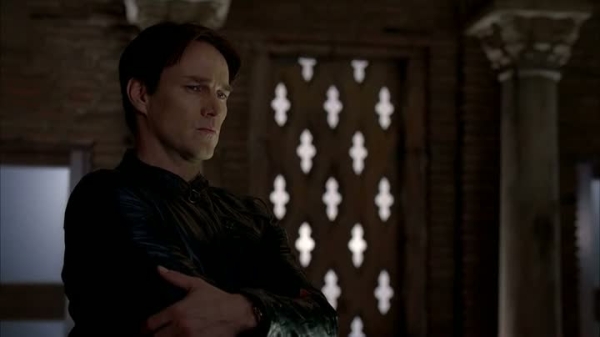