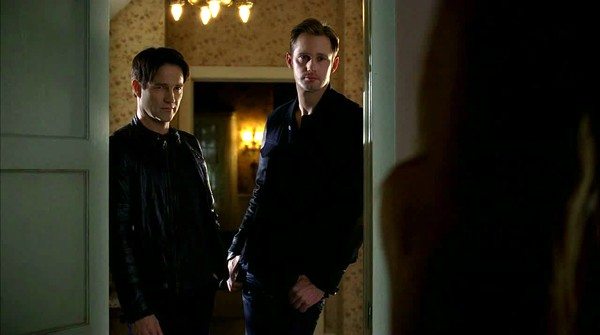 Things are heating up at Sookie’s. Alcide and Sookie are getting hot and heavy, she climbs him like a tree and he carries her off to the bedroom where clothes begin to fall off.

“I’ve waited so long for this”, Alcide whispers in a husky voice. And…. bleeegh… Sookie throws up all her consumed drinks over Alcide’s shoes. Deal breaker!

“Alcide, you sure know how to treat a lady.”

Bill and Eric stand in the doorway of the bedroom and just watched the whole disgusting scene folds out. Smirks on their faces: PRICELESS. 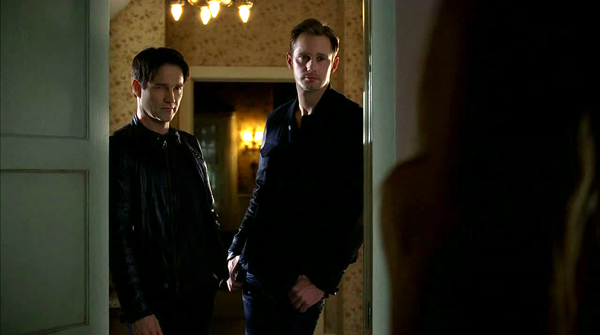 While Alcide wipes off the puke from his shoes, Sookie tries to sober up with coffee and listens to the plan of Bill to try to unglamour Alcide’s employee, Doug. He is the only one who saw who dug up Russell. When Sookie asks them where they were anyway, because she and Alcide were worried, Eric responds with sarcasm: “Clearly”. Bill prefers not to respond at all and focus on the task at hand. Bill, Eric and Alcide start to bicker about whose fault is what. Sookie, still in a certain state of intoxication, imagines them as barking dogs having a go at each other. Sookie realizes that no matter what she does her life is not going to chance: Bill and Eric are back in her house again and Russell wants to suck her blood: Must be Thursday! The vamps were prepared for some heavy convincing, but Sookie is already out the door leading the way into the jaws of death: Boot and Rally! The boys are impressed and amused. 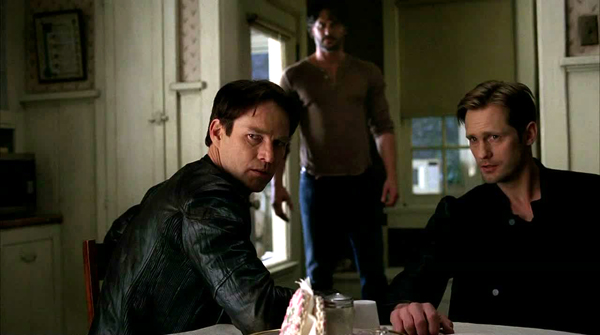 At the parking garage where Russell was buried, Sookie takes a peek into Doug’s head and they learn that Russell was freed by a woman wearing an Authority necklace. Bill is convinced that it’s Nora and he doesn’t believe Eric when he claims he never told Nora about Russell. A few cracks appear in the lovely bromance that lasted four episodes.

The Scoobie Doo gang continues to follow the lead in Alcide’s truck and Doug’s memory takes them straight to an abandoned hospital. Bill continues to elaborate on his theory that Nora orchestrated the whole thing, so they would find Russell and he could be a powerful ally to her cause. If she were to serve Bill and Eric to him, she would be in a position to negotiate with Russell. Eric continues to believe in the innocence of his sister and when Bill tells him that she is a traitor and a liar just like her brother a fang show off follows, that is only interrupted by Bill’s phone that’s ringing. Molly, the tech girl of the Authority, informs them that their countdown has started and their iStakes with be activated at dawn if they don’t find Russell in time. With probably only a couple of hours left to live, Bill and Eric put their differences aside again and continue their awkward collaboration once again.

Bill and Eric will split up to search the building and Sookie, Alcide and Doug should wait outside. Sookie’s seen enough horror movies to know that that’s not the best idea and besides that her microwave fingers could come in useful: “it’s me protecting you instead of the other way around.” You go girl!

The asylum looks like something taken straight out of a 1980’s slasher movie and led by Doug’s memories they venture into the building. Alcide picks up the scent of wolves: Russell’s bodyguards. When they discover a room full of rats feasting on multiple dead bodies, they know they are getting close. When they hear a noise and realize they are being watched, Doug loses his nerve and runs off and enters a room that is full of people in straitjackets hanging from the ceiling: Russell’s pantry. The prisoner who lost 40 pounds with the  Atkins diet tells them where the others were taken, but when he doesn’t stop talking, Bill shuts him up with a ssshhh and hand gesture that would make dog whisperer Cesar Millan proud. 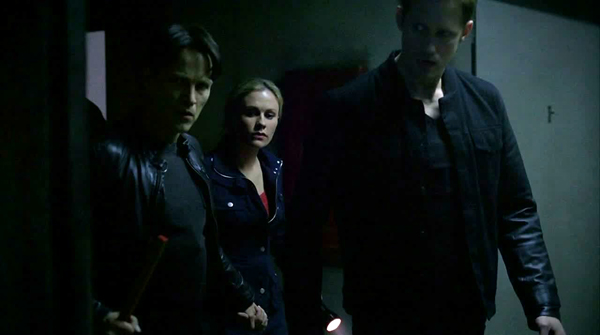 Bill turns to Sookie: “You ready?” A few notes of their music play, the cello is unmistakable. Sookie nodes. Bill, Sookie, Eric and Alcide press on, deep into the building. Bill and Sookie holding hands. The gang finds Russell, laying on a bed, looking much better already. I’m not really sure what the plan is here. Do they plan on bringing him to the Authority? Stake him right there on the spot? Nobody seems to be doing anything however and while Eric and Russell exchanges a few threats, something happens to Alcide. Is he being taken by Russell’s watch wolves? Does he shift and attack? Can’t wait till next week to find out what will happen next!