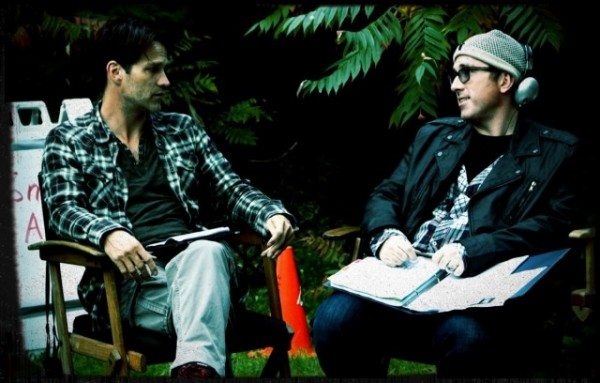 If you own The Barrens DVD and listened to the commentary of director Darren Lynn Bousman, you already know about the setbacks the crew experienced on set. In an interview with Dread Central Bousman tells about the difficult conditions on set in Ontario and how Stephen Moyer was totally down for anything.

Stephen was great; the whole movie rests on his shoulders and he just kicks ass. I have tremendous respect for this guy; he always wanted to be on set as much as humanely possible and it wasn’t necessarily an ‘easy’ set to be on considering our location. But I think that that to me is what makes for a great actor- someone who was going to be there not only for the job, but as a team player in this whole process.

The range of emotions that he has to go through in 90 minutes is astounding and I think his work here really showed his acting chops off. He was totally down for anything and he took a big risk with his movie. I think that he saw it as a chance to do more than he gets to do on “True Blood”- being a reserved vampire- and show off that he does have this extreme emotional range when he’s got the right material.

This movie was made for a very small amount and we shot it in what turned out to be 16 days; it was probably the hardest thing I’ve ever made. It was a really, really rough shoot; we were plagued with weather issues and forced to shut down shooting numerous times- it was a nightmare, literally. Plus, this was the first film that I have done which was shot entirely on location. Before, I had sound stages and controlled environments but with The Barrens, we were in the forest the entire time and you forget to take into consideration things like having to move cables and lighting through the forest. You could spend half a day just moving cable- it was awful.

To prove that The Barrens really isn’t a monster film, the actual Jersey Devil can only be seen for about a minute in the whole film. But Bousman explains that this was not his original plan.

I did not want to do a CG monster movie at all; that was never my intention at any point on this movie so I always intended to have a practical monster in The Barrens. That being said, one of the problems that we ran into is that we were very limited to what we could actually afford and get away with for our Jersey Devil and given our time constraint with production moving so quickly, I never saw the Jersey Devil until the day it showed up on our set.

So when it actually showed up on set, the thing weighed hundreds of pounds and the actor that was in it couldn’t move at all inside the costume. Originally, we were supposed to see the monster more in the movie but it got to a point that he couldn’t move in the suit and after all was said and done, it actually took five or six guys to operate it. So the Jersey Devil ends up being in less than a minute in the entire movie.