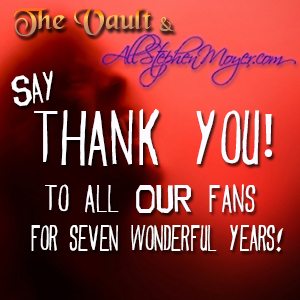 Now that True Blood has ended, Shad and Lynn thought it appropriate to thank all the fans who have been faithful to our sites throughout True Blood’s run.

We want to express our sincere appreciation to those who have contributed to our sites by visiting often, adding their comments and thoughts to our posts and those that have served as guest writers or reporters at events.

THANK YOU to our fans!!!

Although True Blood has ended, our sites will remain, so we hope you will come back often to get all the True Blood and, most importantly, Stephen Moyer related news..

Below are a few statements from some of our biggest contributors on The Vault and Allstephenmoyer who have shared with us, their thoughts about the ending of the series and what True Blood has meant to them.

PLEASE NOTE: The statements below are in no particular order and were written prior to the Season’s finale episode.

BARBI aka, ThelLouAh, True Blood.  The craziest, sexiest, funniest, heartbreaking-est guilty pleasure I’ve ever been addicted to!  I will miss the love, the laughter, the tears, and of course the rampant nudity. My summers will never be the same after True Blood meets the true death.  Kudos to all on a great show that will be forever missed!When True Blood started in 2008, I remember not being sure what I was in for.  I was familiar with the SVM books, but you never really know how adaptations will go. I fell in love with Bill Compton and Sookie Stackhouse, their portrayers Stephen Moyer and Anna Paquin, and just about every other denizen of the fascinating town of Bon Temps, Louisiana and it’s environs.  I liked that the show followed the books early on, but even then deviated when necessary – Lafayette was too cool to kill – and never felt the need to follow the books chapter by chapter.  All due respect to Ms. Harris, but Alan Ball and company built True Blood into its own fascinating entity, and I enjoyed almost every minute.I have always appreciated that True Blood could be completely mindless entertainment full of boobs and blood, if that’s what you were looking for.  But if viewers wanted metaphors and allegories and even political stances on occasion, they could be found and enjoyed amongst the vampires, faeries and shifters we came to see as friends.Thank you, True Blood, for letting the good times roll for 7 amazing seasons. My summers, and my life, will never be the same. Kudos on a job well done.
WILLKILL4BILLWhat has True Blood meant to me?

Never having participated in any sort of “fandom” of a show, it has been an eye opener.

I think it is the sense of community that developed from a variety of people from all walks of life across the globe. Our avid interest in this strange world of True Blood drew us in to discuss our favorite TV program, characters and the story itself. Our own global community that discarded all barriers like age, education, race, etc. from participation in exchanging our thoughts and ideas, in a way following True Blood itself by embracing what may be different but is just as valid. Friendships were created where otherwise you may have never crossed paths. That is a powerful thing and I think remarkable.

ROMAGIRLI’m a vampire girl, so True Blood was highly anticipated by me.  That first season was magical.  Stephen and Anna made soulmates Bill and Sookie leap off the pages of the books. Their portrayal kept me true to the end. The show started at a difficult period in my life but TB was always there for me.  I became a Billsbabe, and have been interacting with some wonderful women who are best TB fans ever.  In between seasons, we have been speculating, participating in charities, blogging, tweeting, and supporting the cast in their other work.  It has been my extreme pleasure to participate in the TB fandom these past seven seasons.  I will miss it more than I can say, and can honestly say that there will never be another experience like this for me. Thank you Charlaine Harris, Alan Ball, Brian Buckner, Stephen Moyer, Anna Paquin, the cast, and writers for all the memories. A huge thank you to The Vault and All Stephen Moyer.  I am forever a Billsbabe and Moyerist.

ROWENAWhen Vampire Bill first showed up, and Sookie exclaimed “I think Merlotte’s just got its first vampire,” I was hooked … curious, entranced and eager to learn more about the True Blood world and its denizens. I’ve stayed that way through seven seasons, thanks to the amazing characterizations, intriguing stories, superlative sets, music and costumes. I have so enjoyed immersing myself in this fantastical world and following the lives of the characters I’ve grown to love and appreciate. It’s been an incredible odyssey. Salute to everyone involved!!

BILLS4MEI have always been the sensible one. But once I was exposed to zany world of True Blood, another side of me was unleashed. Less boring. More crazy. I remember going online to find out more about the show and discovering the Billsbabes. Next thing I knew, I was one of them! Then there we were tracking down Stephen Moyer in the woods. I’d never done anything like that in my life let alone tell people about it. At the end of it all, I must say that it felt empowering. It feels good to let your passions out in the open and make some wonderful new friends in the process. I have True Blood to thank for that.

MY OBSESSION, aka Kathy
There’s so much to say about True Blood. For me, something unexplainable and magical happened when I first saw Bill/Stephen. This was an actor I had no knowledge of and the more I saw and learned of him through ASM and ASMF, the more I became obsessed. I had never, ever belonged to a forum or fan group before HE came into my life or as the hubby calls him “your boyfriend”. Never have I collected so much “stuff” associated with an actor or show…calling and hounding shops on when they’ll get the latest item I was lusting after on Stephen. Have never had so many discussions with people and complete strangers about a tv show. Through ASMF I have come to know people from all over the world and it’s been a truly wonderful experience.

Stephen is more than a character on a show-he’s funny, an entertaining story teller, not boring and sexy as hell. I find myself smiling when he talks. I love seeing him in pics dressed in the same old cut-offs and shoes that he’s had for years. He’s very relatable and un-celebrity like, down to earth and makes me more obsessed, if that’s possible. I’m sure I’m over my limit of words but when I get talking about True Blood and Stephen, I can’t stop!

PLEASE FEEL FREE TO TELL US “WHAT TRUE BLOOD HAS MEANT TO YOU” IN THE COMMENTS BELOW!