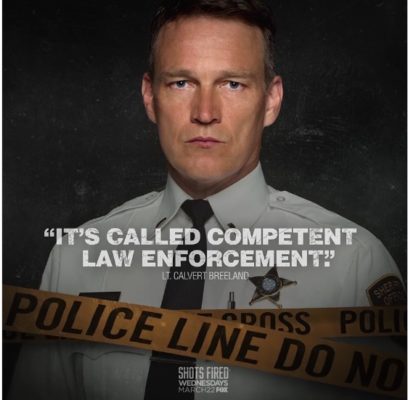 The premiere of Stephen Moyer’s upcoming series for Fox “Shots Fired” is just a bit over a month away. The 10 episode limited series starts on March 22.

Upon visiting the Shots Fired website I noticed that there has been some activity including a newer video, cast bios and more.

Here’s what we’ve found so far:

NEW GIF file of Stephen Moyer in his role as Lt. Calvert Breeland: 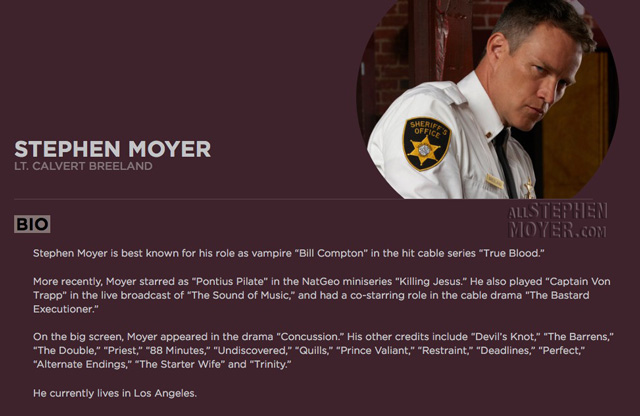 Examining the dangerous aftermath of racially charged shootings in a small Southern town, SHOTS FIRED is a dramatic new event series that is a “why done it?” and a “who done it?” From Gina Prince-Bythewood (“Beyond the Lights,” “The Secret Life of Bees,” “Love and Basketball”) and Reggie Rock Bythewood (“Beyond the Lights,” “Notorious”), the 10-hour event series is an explosive look at the criminal justice system. When an African-American police officer kills an unarmed white college student, a small town in North Carolina is turned upside-down. Before the town has a chance to grapple with this tragedy, the neglected murder of an African-American teen is brought to light, re-opening wounds that threaten to tear the town apart.

Fox’s “Shots Fired” opens with a police shooting. But unlike many of the widely publicized police shootings of unarmed black men, creators Gina Prince-Bythewood and Reggie Bythewood begin their 10-part series with a young black police officer shooting a young, unarmed white man in a small town in North Carolina.

That may seem a counterintuitive plot point for the creators, whose aim, as Bythewood told reporters at the Television Critics Association winter press tour Wednesday, was to perform “an autopsy of a town like Ferguson,” where teenager Mike Brown was shot and killed in 2015. Brown’s killing, and the lack of prosecution for the officer who shot him, inspired months of protests in the Missouri town outside St. Louis.

But Prince-Bythewood and Bythewood, who are African-American, defended the choice to swap the races of the officer and victim. “You see this in the news all the time. It’s easy for people to watch the news.”

Sneak Peek: A Cover-Up from “Episode 1