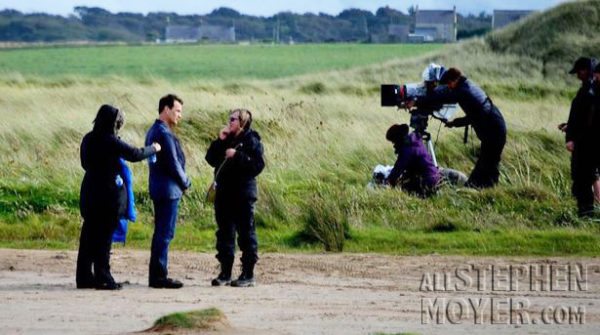 More photos have been released for Stephen Moyer’s new drama “Safe House.”  The series is currently being filmed on the island of Anglesey.

A historic county of Wales and later administrated as part of Gwynedd, Anglesey today makes up the Isle of Anglesey County along with Holy Island and other smaller islands.[4] Almost three-quarters of Anglesey’s inhabitants are Welsh speakers and Ynys Môn, the Welsh name for the island, is used for the UK Parliament and National Assembly constituencies.

Safe House follows the story of on an ex-police officer who runs a safe house on an island, stars Stephen and is directed by Hinterland/Y Gwyll’s Marc Evans.

With Stephen Moyer in the lead role as ex-police officer, Tom Brook he is joined by Zoe Tapper, who has featured in Mr Selfridge and Lewis, as his partner Sam.

Crews were spotted setting up and shooting in the village square in Aberffraw on Monday.

Filming has also taken place at Craig-Y-Mor, a Grade II listed building near Trearddur Bay , known by some as “The Haunted House on the Hill.”

While the Lake District was the setting for series one, the new incarnation is largely based on Anglesey.

Filming started in Cheshire and Liverpool in August with the island said to be playing a major part in the new storyline.

Producing the series are Eleventh Hour Films, who have New Blood and Wallander among their credits.

“The format lends itself beautifully to creating a suspenseful drama with a new set of characters in a new safe house.

As always Ed and Tracey’s scripts are gripping and compelling with twists and turns that shock and take you by surprise.”

The series is expected to be broadcast in 2017.