In February, USA Today announced the list of celebrities that were to participate in the 35th Annual Toyota Pro/Celebrity Grand Prix this year. Stephen Moyer was on that list.

When we first saw that Stephen was included in the list of celebrities, we were sure that it must have been a typo. We were pretty convinced that we knew more than most about Steve, so this was certainly a surprise. We now know that this is a passion that Steve has always had. Who knew? Even as a teen, as he revealed in a later interview, he was caught driving before he was even of legal age to do so and to appease his passion; his Dad took him to a track to drive.

After that initial report, the press started buzzing with stories of Stephen’s participation including articles and video interviews with him while at training for the race, in March. We immediately did whatever we could to publicize this activity by following all the press and posting about it here and on Facebook and Twitter.

The race was to be on April 16, 2011, in Long Beach, California and the celebrities had about two weeks of training before the event. We got in touch with Toyota Racing asking how we could help to publicize the day and if there was any way for us, as the premiere Stephen Moyer site, to be included as press. It didn’t look like that would be possible as only “official” press were even asked to submit credentials, but that all changed with an email from one of the PR people at Toyota Racing.

Friday, April 15, was the “Toyota Pro/Celebrity Qualification Day” and I (Lynnpd) had the opportunity of shadowing Steve, not in the race itself, obviously, but in the celebrity compound. This day before the actual race was devoted to press interviews and to qualification trials which would determine the starting order of the cars on Saturday, race day.

Because of this exclusive access in the celebrity compound, I was able to follow Steve around all day, hear his interviews with the press, take pictures and video and even get a brief interview with him for AllStephenMoyer.com.

During the day, Stephen was more than generous with me (as he always is) even though he hadn’t had a bit of sleep. He confided to me that he had been on the set of True Blood until 6:30 am and drove down to Long Beach from Los Angeles direct to the compound. However, even though I’m sure he was exhausted; you’d never know it by his behavior. He tested out his car; spoke to technicians, signed autographs for the crowds of fans and did all that was required of him.

I knew that he was doing this for his charity, Facing the Atlantic, but when I heard some of his interviews with the press, it finally sank in for me how passionate he is about this sport. And, I also found out that he was considered one of the better celebrity drivers this year with a good chance of winning. At the morning of Qualification day, his odds were 10:1; placing him second in line favored to win against the other celebrities. However, as you all probably know those odds were going to be “flipped” before the day ended, in more ways than one.

In the morning all the drivers did a “practice” qualification race and I remember that when Steve returned he wasn’t happy with his performance. He said he could have done much better and I knew that he planned to better himself in the afternoon official qualification run. It was tough going for him I’m sure as the day wore on and he became even more exhausted, but again he was in good spirits and did all that was required. The drivers posed for many photos and they even used Steve’s car in the pictures (see photo below).

He could do no wrong, it seemed and the Toyota people appeared to love him and I could tell he was a favorite. 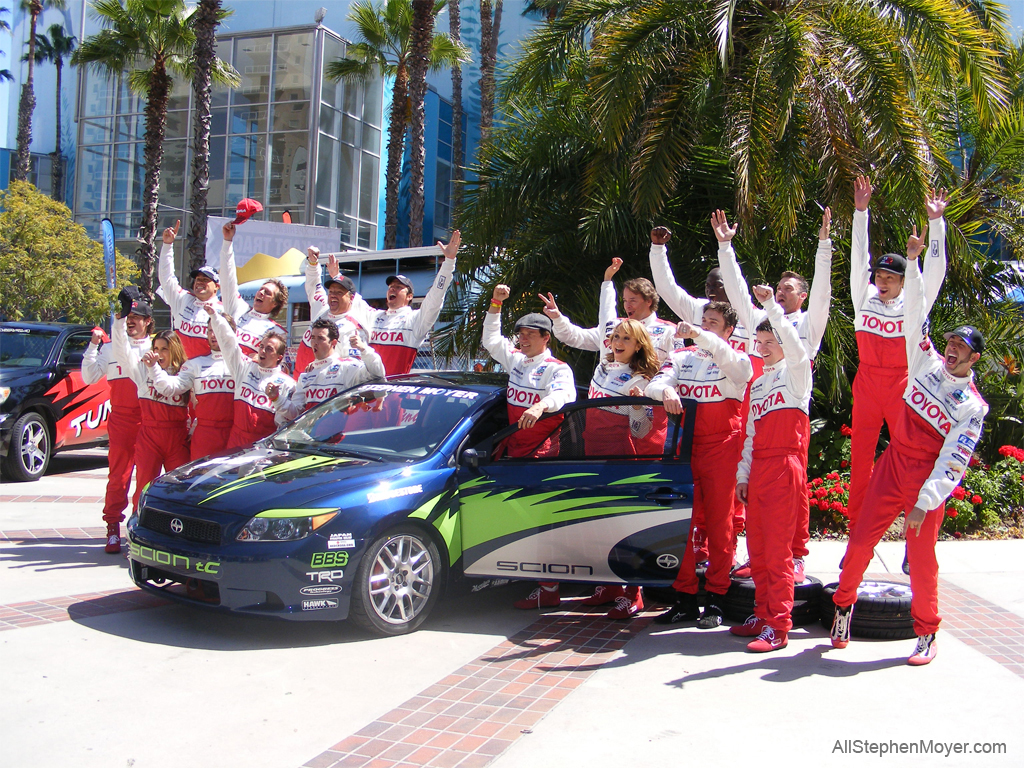 Later in the afternoon, after all the photos, interviews, and several meetings had ended the “official qualification race” took place. The goal of this qualification was to get the fastest lap in order to win the best position for the next day’s “official” race. Pole position is the sought after prize since the winner of pole position gets to be first in line on race day and that was what all were working toward. As each car left the compound Steve’s family cheered him on and I was right there with them, what a treat. After the cars had gone, we all watched the race in the celebrity compound tent on a jumbotron TV and Steve was doing quite well. However, soon we saw the now famous “Stephen Moyer car flip”. 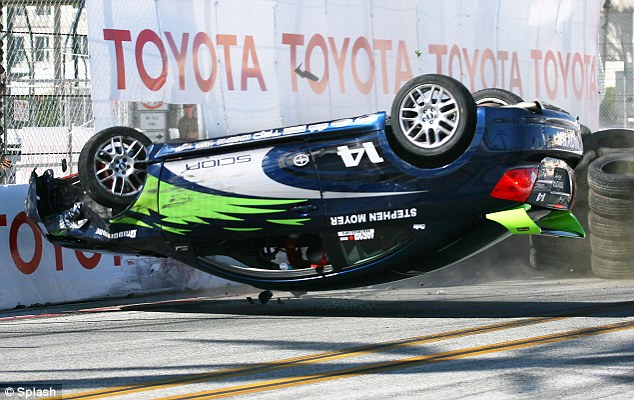 Steve had misjudged a turn and ran into the tires against the wall and his car flipped over. Luckily, the car did a complete flip, righted itself and he was OK. Thank God, he was fine; it seems the car was hurt more than he was. However, there were a few very nervous moments for his family and for me, too.

After the qualification was done, the cars returned to the compound and it was announced that Stephen had come in with the fastest lap, so he had won poll position and also $15,000 for his charity, Facing the Atlantic. For most, I reckon that this would have made fainter hearts chuck it in, but not Steve; just the contrary, and after taking the check for the $15,000, he was ready for the race.

If it’s possible, as Saturday morning came, the official Race Day, he was even more determined to race and win. When he arrived at the compound, he was all suited up and ready to go, but I could tell that something was amiss. He never came near his car which was sitting right up front in the first position (pole position), but instead, he was going back and forth from trailer to trailer in the compound.

Then, the news came via Twitter that Stephen Moyer had pulled out of the race. What? Surely this can’t be? Later that morning, when I saw him, I was able to ask about it and he explained that HBO, after seeing the previous day’s car flip, had asked him, for the good of the cast and crew of True Blood, to pull out. He was very disappointed but felt that he had no choice and did as they requested.

I was worried that this might end his racing days, but believe me when I say; we haven’t seen the end of Stephen Moyer’s racing. If he can get the proper insurance in future, I’m sure he will do it again and again.

For those of you interested in reading all the coverage we posted for this race and Stephen’s participation, we have a page here on AllStephenMoyer where you can read each post or just browse through them and choose those that interest you. Click on the link below where you will find all stories listed.