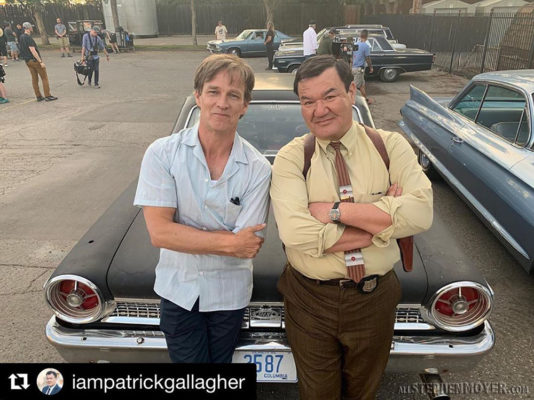 Recently, Stephen Moyer has been in Canada filming his new series, Fortunate Son which has been filming all summer. Friday, photos and a video by cast members were posted that included Steve indicating that the series had wrapped!

Below are two photos from the final day of shooting:

Below is a video showing Stephen during the last day of shooting. We see Stephen place a big smack on we think “Darren Mann.”

The series is expected to be out soon!

It will air eight, one-hour episodes later in January of 2020 on CBC in Canada. The production will have an international debut (hopefully this includes the US) later on in the year. The series filming has taken place solely in Alberta in High River, Calgary, Springbank, and Calgary.

First off, the production was shooting in the town of Drumheller, a few week’s past in its downtown core. The streets were barricaded and storefronts were changed to transform the town into what it would have been like in 1968.

As we posted recently, Stephen’s new series “Fortunate Son” is set in the chaos of the 1960s during the Vietnam War. This was a time where many Americans were smuggled into Canada to escape the USA draft.

Below is information describing what the show is about:

“Fortunate Son is about a family from the US that has moved to Canada and set up an underground railroad for draft dodgers and deserters who are trying to resist the Vietnam War draft. The story is about them, and some of the draft dodgers who come across and also the political times. FBI and CIA were very active in those days, particularly in relation to the anti-war movement,” explained Andrew Wreggit, Executive Producer.

Wreggit was born in Calgary and is known for his work on the film, Menace in which Stephen Moyer was a part, North of 60 (1992), and Survival Code (2013). In addition to Stephen, the cast members include Kari Matchett, Darren Mann, Kacey Rohl, Rick Roberts, Patrick Gallagher, Ty Olsson, Alex Nachi, and Zoe de Grand’Maison.

Thanks to @Moyachirps for finding the images and the video! She has such an eagle eye!

See all the photos from this series as they arrive in our Photo Gallery here:

CLICK HERE TO SEE ALL THE PHOTOS FROM FORTUNATE SON