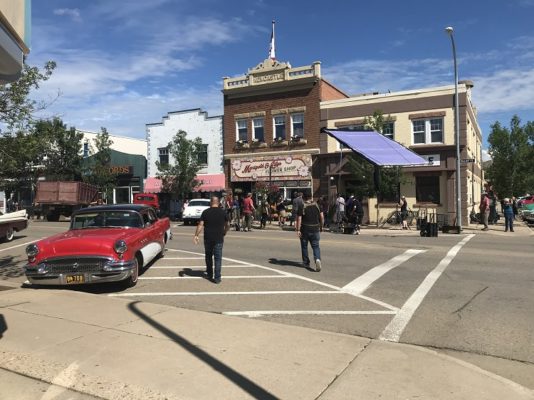 We still don’t have  a”first glimpse” of Stephen Moyer as he looks in his role of  Vern Lang, a CIA agent in the new CBC production of Fortunate Son. However, we have learned where the series is being shot and some other tidbits about the series from drumhelleronline.com, as detailed below:

First off, the production was shooting in the town of Drumheller, a few week’s past in its downtown core. The streets were barricaded and storefronts were changed to transform the town into what it would have been like in 1968.

As we posted recently, Stephen’s new series “Fortunate Son” is set in the chaos of the 1960s during the Vietnam War. This was a time where many Americans were smuggled into Canada to escape the USA draft.

Below is information describing what the show is about:

“Fortunate Son is about a family from the US that has moved to Canada and set up an underground railroad for draft dodgers and deserters who are trying to resist the Vietnam War draft. The story is about them, and some of the draft dodgers who come across and also the political times. FBI and CIA were very active in those days, particularly in relation to the anti-war movement,” explained Andrew Wreggit, Executive Producer.

Wreggit was born in Calgary and is known for his work on the film, Menace in which Stephen Moyer was a part, North of 60 (1992), and Survival Code (2013). In addition to Stephen, the cast members include Kari Matchett, Darren Mann, Kacey Rohl, Rick Roberts, Patrick Gallagher, Ty Olsson, Alex Nachi, and Zoe de Grand’Maison.

The Town of Drumheller

The town of Drumheller has always had an old-time feel that you can experience when walking down her streets. This was also apparent to the location scouts of the production.

Fortunate Son crew filming on Downtown Drumheller.“We were looking for the main street in a town that looked like it would fit 1968. So, Drumheller, of course, has a beautiful downtown main street. We thought that it would be a great thing to do a few touch-ups and turn it into 1968,” he explained.

Almost every storefront down Center Street and 3rd Ave was changed to fit the area. The Royal Den of Hair Connoisseurs was changed to be the police station in the production. The only thing left untouched was the Napier Theatre as it already resembled the 1960’s era.

“That was our brilliant art department. They had big maps of the main street and all of those stores and figured out what they needed to change to make it period appropriate. We had our police station on the corner there, that had to match the interior that we are building elsewhere,” continued Wreggitt.

When will it Air?

The television series will air eight, one-hour episodes later in January of 2020 on CBC. The production will have an international debut (hopefully this includes the US) later on in the year. The series filming has taken place solely in Alberta in High River, Calgary, Springbank and Calgary.

As more information becomes available about Stephen’s new production, we’ll be sure to pass it on to our readers, so be on the lookout. Are you excited to see Stephen’s new project?  We sure are!