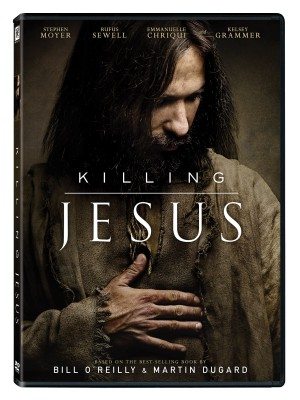 The DVD and Blu-Ray of Stephen Moyer’s latest production of “Killing Jesus” will be released on June 2 in the US.

Stephen received praise for his portrayal of “Pontius Pilate” in the 3 hour miniseries which aired on the National Geographic Channel on March 29, 2015. For all of his fans, he was the best part of the production; he played his part to perfection!

Based on the New York Times best seller by Bill O’Reilly and Martin Dugard, Killing Jesus is an epic motion picture event chronicling the life and death of Jesus as never before. Featuring an all-star cast, including Stephen Moyer, Rufus Sewell, Emmanuelle Chriqui and Kelsey Grammer, this thought-provoking account adds new context to the story of Jesus and the conflicts that led to his demise.

Amazon has a special Pre-order Price Guarantee, too! Order now and if the Amazon.com price decreases between your order time and the end of the day of the release date, you’ll receive the lowest price.

Below is the info about each release. Purchasing your copy at Amazon.com by clicking on the links below:

To learn more about the production go to our Movie & TV Page for Killing Jesus by clicking on the image below: