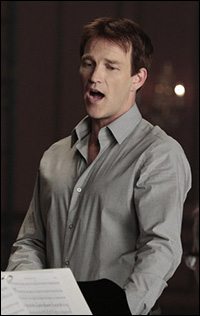 Stephen explains what his favorite things are from the Sound of Music.

There are quite a few things. I don’t think I’ve ever heard “Climb Every Mountain” done by somebody like Audra McDonald. She’s got such a rich voice. This is no disrespect to everybody else who’s played that part, but growing up it was always sort of my least favorite song. I’m thinking of it being done by a shrill nun. [Laughs.] And that is not how it feels when Audra McDonald sings it. So that’s a very sort of amazing classic moment. “Do Re Me” is awesome. The kids do it brilliantly and so does Carrie.

For me, as the Captain, there’s a beautiful moment that stands out. He’s shut music out of his life. Everybody is very regimented and he runs his house like a ship, like a frigate. It’s a very beautifully constructed moment where he’s angry about the politics of what’s going on, he’s angry about his children being dressed in old curtains and he’s angry about the fact that his best friends want him to convert and become a Nazi to just get by so that he doesn’t get into trouble. Then, at the height of his anger, his kids start singing and it’s a song that he used to sing as a kid. It transports him. So for me, that’s a really important moment in the show because it’s the turning point for the Captain from being shut off because of the death of his wife and having been grieving for the last five years – he realizes that he shut out this essential growing tool for the kids, which is to be surrounded by music. One of the things that our musical director David Chase has said is that we sort of have this glib phrase in our head, which is the title, The Sound of Music, which is how it’s just become. But the point is, it’s The Sound of Music that turns his life around. It’s music coming back into that house and how it feels. That is the story, really.