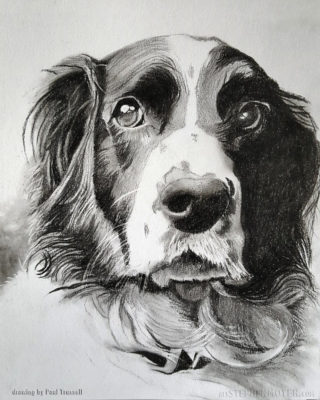 An old friend of Stephen Moyer’s named, Paul Trussell posted photos last weekend of his meeting in London last weekend with Stephen Moyer. At that meeting, Paul presented Steve with the drawing he made of Steve’s beloved pup, Splash who sadly left this world a few years ago. 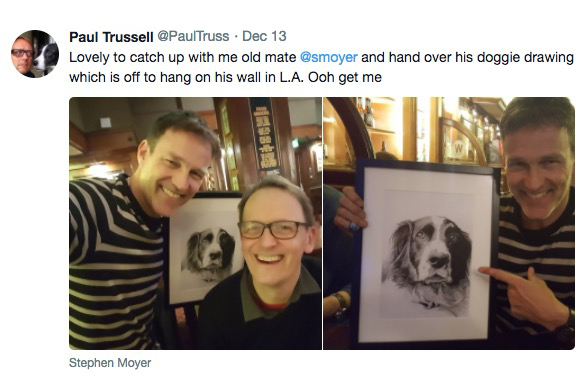 Below are the photos full size:

Stephen has often written about his dog Splash, how much he misses him and what a great mate he was. The origins of the dog’s name is quite interesting. His original name was Flash, but was later changed to Splash because he fell in the river a lot when Steve was living on his London houseboat.

In the November 26, 2106, issue of People Magazine (under the Sexiest Man Alive column) Steve was quoted as saying the following about Splash:

Splash’s mum, Feather Milburn, was a beautiful liver-colored pedigree Spring Spaniel that had been mated with another show-winning liver-colored Springer. The owners were most upset when out popped 10 black and white mutts. The farm next door’s border collie sheepdog Jed Butcher had got their first! Splash has been with me since he was seven weeks old. He’s lived on the houseboat, chased sheep off a cliff; been shot at by an angry shepherd and much more during his life. In his later years, he was known to still bark at shadows.

We thank Paul for posting his drawing; such a lovely portrait of Steve’s pal, Splash and are happy to share his artwork with you here. Below is a photo of the portrait which Paul took. He says Steve plans to hang it in his home in Venice, CA. We’re happy that now Steve has such a well-done work of art in order to remember Splash for all time!