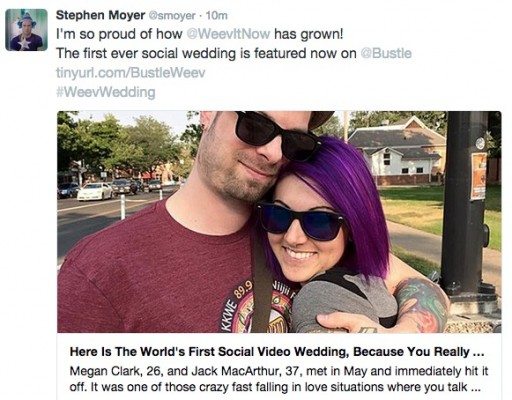 Anyone following Stephen Moyer or this site knows that he is the genius behind the new social media app, “WEEV.”  The APP has already won an Appy Award and we’ve made countless posts about it and even attended the WEEV Promotional event at Comic Con in 2014.  See all of our posts about WEEV here.  Now, WEEV has made another breakthrough by having the very first social media wedding take place on the APP.

Steve even tweeted about it today: 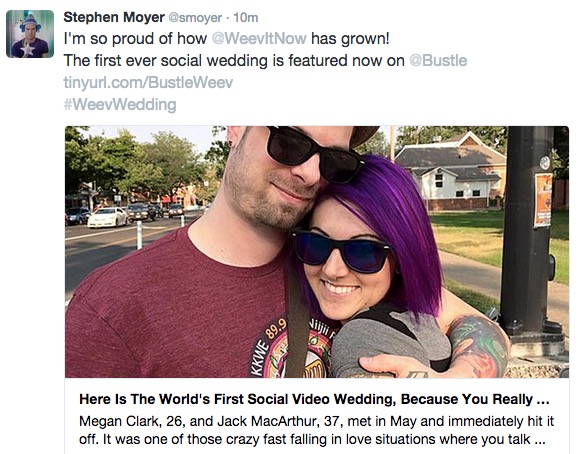 Megan Clark, 26, and Jack MacArthur, 37, met in May and immediately hit it off. It was one of those crazy fast falling in love situations where you talk as much as you can every day and spend the rest of the time thinking about each other and about what you’re going to say next. Pretty common story, right? Guy meets girl, guy and girl start talking, guy and girl fall head over heels in love. The big difference in their story, however, is that these lovebirds didn’t meet IRL until they’d already taken the tumble. Megan and Jack met on the social video app Weev and last weekend — after chatting online for less than four months and spending only four days physically together — they got married.

Jack is from North Dakota and Megan is from California but the wedding took place in Fort Collins, Colorado, in front of the 50 or so Weev community members who could physically attend. They were joined by scores of others who “popped in” via the app throughout the ceremony, watching as Megan was given away by Weev founder Andrew Sachs.

The video of the ceremony shows users participating from as far away as Egypt, commenting on the ceremony, offering their well-wishes, and goofing around with wedding rings. It’s an intimate glimpse into the surreal reality of a community that clearly cares about each other and is intimately involved in each other’s lives in a way that in a way that has never been seen before.

Congratulations to the happy couple, Megan and Jack!