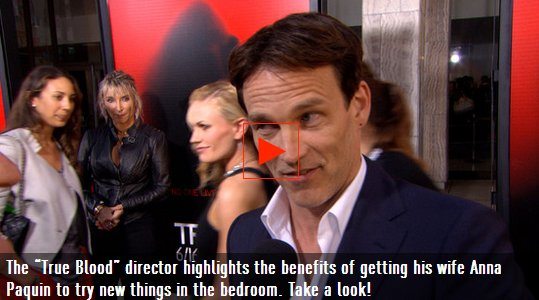 Stephen and Anna have has several sex scenes together on True Blood so, it’s no doubt the two are comfortable filming them.

Now that Stephen is a director, he says he wouldn’t mind directing Anna with someone else in a steamy scene.

“When you are directing your wife in a sex scene, you get to do what the writers come up with,” Moyer told me at True Blood’s season six premiere in Hollywood. “Maybe they’re coming up with something you haven’t thought of before. You can try things out without it being weird.”

Robert Kazinsky, who plays Paquin’s new love interest on the show, says it certainly was weird having Moyer around when he and Paquin had to get down and dirty.

Click on the image below to hear Stephen talk about it with EOnline: