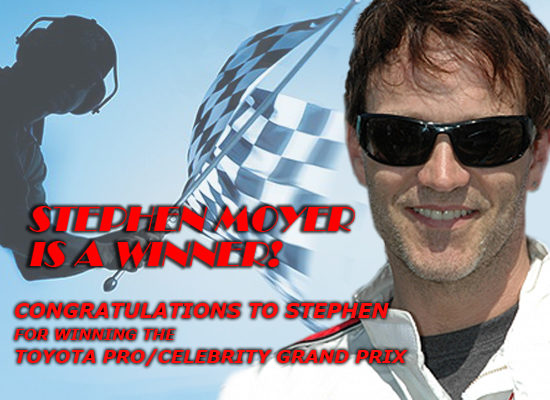 Stephen Moyer is a winner to his Fans even though he has been forced to pull out of the Toyota Race!

Stephen has confirmed to AllStephenMoyer that the decision to pull out of the Toyota Pro/Celebrity Race is based on insurances issues with HBO and True Blood production. Many main cast members are on hiatus right now, but Stephen is in full production and they could not risk that he might get hurt in today’s race.

Stephen was feeling good today and was fully ready to participate in the race. Unfortunately now he can only be a spectator and watch how William Fichtner takes over his pole position.

Here at AllStephenMoyer.com we are extremely proud that Stephen claimed the pole position yesterday and secured $15,000 for his charity of choice: Facing The Atlantic. He will always be a winner to us.

Facing The Atlantic has our full support and yesterday we received photos of Stephen taken in his trailer on set where he poses with the next signed item that we will be auctioning off for this wonderful cause. So stay tuned for our next charity auction next week.